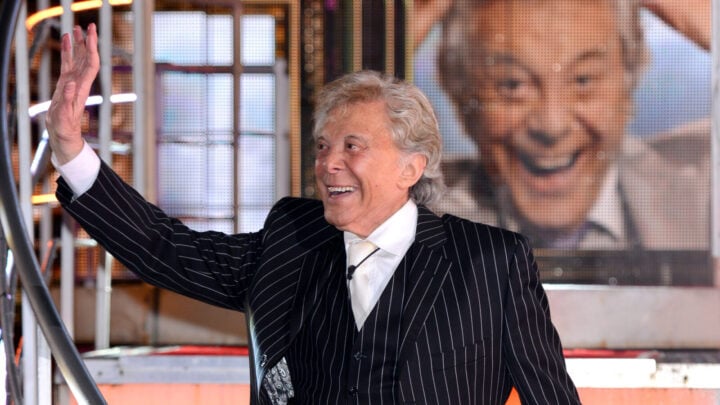 Blair was born in 1928 in Montreal, Canada, however his family relocated to England when he was very young. His career kicked off when he began performing improvised dances in air-raid shelters during World War II.

After his father’s death when Blair was 13, his elder sister Joyce encouraged him to take up acting, and Blair began appearing in musicals alongside her shortly after. Blair’s first performance was in Watch on the Rhine at age 14.

Blair’s long career in acting was beautifully illuminated by his self-taught dancing skills. As a young boy, Blair was inspired by dancers Fred Astaire and Ginger Rogers and copied their routines at home with his sister. Blair once noted in an interview that he and Joyce “used to go home [from the cinema] and try to copy them. That’s how we learned to tap dance.”

At the Royal Variety Performance in 1961, Blair took part in a comedic dance-off against Sammy Davis Jr. Speaking of this experience, Blair said, “It was the highlight of my career… that was one of the most thrilling things, ever. He [Sammy Davis Jr] was just so kind to me. He gave me a silver dollar. I carry it with me all the time.”

In 1967, Blair married Susan. Blair joked that he had cheekily seduced his wife at a party, while a friend was interested in her. “I walked in the room and, honestly, I took one look at her and it hit me. I thought, ‘That’s the girl I am going to marry’… Six weeks later we were married,” Blair said of his wife.

“The secret of a successful marriage is memories… that’s why my dad insisted that we went everywhere together, so we could talk about things. I’m so lucky to have a wife who is a nest builder. Her nest is the most important thing in the world to her.

“We’ve got a very, very normal family, and for me everything comes back to family. If they’re sad, I’m sad. I want them to be happy all the time.”

The couple had three children together, followed by three grandchildren.

Furthering his career, Blair played the role of a TV choreographer in The Beatles’ 1964 film A Hard Days Night, before becoming a choreographer for films such as 1969 comedy hit The Magic Christian. He would often run in the same circles as Liza Minnelli and Bob Hope.

Over the years, Lionel appeared on various television programmes, including quiz shows Blankety Blank, Name That Tune, New Faces, Give Us A Clue and – more recently – Celebrity Big Brother.

In 2006, Blair’s pet dog Florence was kidnapped, and he and comedian Alan Carr saved a man from falling from Blackpool pier. Then, in 2007, Blair was diagnosed with – and recovered from – prostate cancer.

In recounting his career, Blair had just one sweet sentiment: “I’ve been in this business since I was 13 and it’s given me a wonderful life.”

Lionel Blair – he was just the best: a powerhouse of positivity and a wonderful talent as a dancer, choreographer & entertainer. He told me stories of his time with Errol Flynn & Ernest Hemingway – he lived his long life to the full & leaves a legacy of style & smiles & laughter. pic.twitter.com/6CkuUoZGZk

Do you have a message for Blair's family?