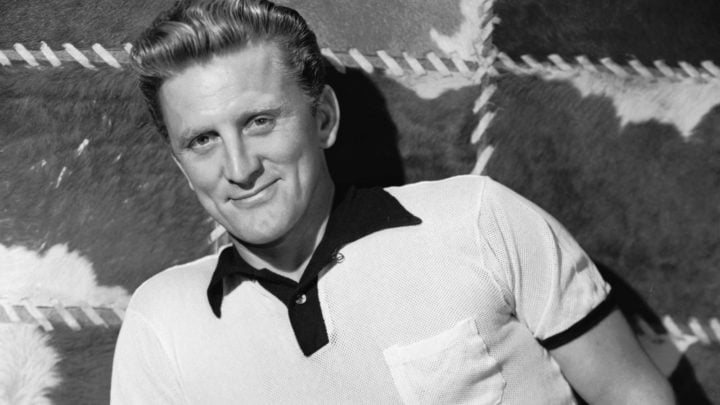 The Spartacus star passed away on Wednesday. Source: Getty.

Hollywood icon Kirk Douglas has passed away at the age of 103. The sad news was confirmed by his son Michael Douglas just minutes ago, as the Basic Instincts star penned an emotional tribute to his “legendary” father.

“It is with tremendous sadness that my brothers and I announce that Kirk Douglas left us today at the age of 103,” he wrote on Instagram. “To the world he was a legend, an actor from the golden age of movies who lived well into his golden years, a humanitarian whose commitment to justice and the causes he believed in set a standard for all of us to aspire to.

“But to me and my brothers Joel and Peter he was simply Dad, to Catherine, a wonderful father-in-law, to his grandchildren and great grandchild their loving grandfather, and to his wife Anne, a wonderful husband.”

Michael, 75, added: “Kirk’s life was well lived, and he leaves a legacy in film that will endure for generations to come, and a history as a renowned philanthropist who worked to aid the public and bring peace to the planet.

“Let me end with the words I told him on his last birthday and which will always remain true. Dad- I love you so much and I am so proud to be your son. #KirkDouglas”

Michael’s wife Catherine Zeta Jones, 50, shared a sweet photograph of herself planting a kiss on her father-in-law’s cheek, alongside the heartfelt message: “To my darling Kirk, I shall love you for the rest of my life. I miss you already. Sleep tight…”

Tributes also flooded in for the star online, as fans paid their respects. Canadian actor William Shatner wrote – Condolences to the family of Kirk Douglas. What an incredible icon he was in this industry!”

Actress Mitzi Gaynor, who starred alongside Douglas in For Love or Money, wrote: “Bravo Kirk Douglas on an incredible life. Thank you for so generously sharing your amazing talent with all of us. The film we made together will always hold a special place in my heart. My love to Anne & your beautiful family.”

One fan wrote: “Kirk Douglas made a lot of great movies. He had a very fulfilling 103 years. He has a lot of fans who will always remember his great performances as an actor. My heart and prayers go out to his family.” While another said: “RIP Kirk Douglas… You are a true legend who will be greatly missed.”

Another commented: “He may be the last of the great Hollywood idols. My favorite #KirkDouglas film is ‘Lonely are the Brave’.”

The veteran actor, who was one of the last surviving stars of Hollywood’s Golden Age, celebrated his 103rd birthday in December with his daughter-in-law Catherine Zeta-Jones sharing a photo on Instagram of her ‘Pappy’ looking fit and well.

Asked in 2016 how he felt about being 100, Douglas said that it had been painful to watch his friends die before him. “Where is Burt [Lancaster]? Where is Laurence Olivier? They’re all gone. I miss them. I feel lonely,” he said.Douglas had four children – Joel, well-known actor Michael with first wife Diana Dill, and Peter and the late Eric with Anne.

Douglas was born Issur Danielovitch Demsky to Jewish immigrant parents in New York. He made his movie debut in 1946’s The Strange Love of Martha Ivers opposite Barbara Stanwyck and Van Heflin, and was soon on the road to stardom, becoming one of the hottest stars of the 1950s and ’60s, with appearances in dramas, Westerns and war movies. But cinema fans will remember him best for his leading role in ground-breaking 1960 film Spartacus.

He was a legendary lothario until meeting translator Anne Buydens in 1953, who he later married and remained devoted to, even publishing a book in 2017 called Kirk and Anne: Letters of Love, Laughter, and a Lifetime in Hollywood that celebrated their long-lasting love. In the book, Douglas recalled writing to Anne almost 60 years ago that he would never run out of things to say to her.

“In fact, if we live to be 100, there will still be so many unsaid things — which is just as well, perhaps, because then, if there is a life after death, we will have many things to talk about later,” he wrote early in their marriage.

Were you a fan of Kirk Douglas? Do you have a message of condolence for the family?