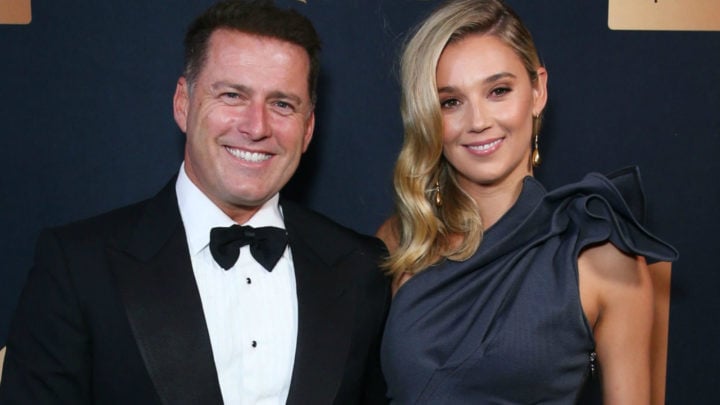 The couple, who tied the knot in December 2018, are yet to publicly confirm the news. Source: Getty.

They celebrated their first wedding anniversary on Sunday, both posting gushing tributes to each other on social media, but it seems that Karl Stefanovic and Jasmine Yarbrough may have another reason to celebrate as multiple reports have emerged claiming the couple are expecting their first child together.

After pictures emerged over the weekend, allegedly showing 34-year-old Jasmine attending a secret baby shower with some of her pals in New York, reports emerged on Monday which claimed that a friend of the pair had confirmed the happy news to The Daily Telegraph.

According to the news outlet’s ‘Sydney Confidential’ column, the couple are reportedly “over the moon” about their impending arrival, with a friend saying: “Jas and Karl are over the moon. They are very happy.”

The Daily Telegraph also claimed that Karl has shared the news with his ex-wife Cassandra Thorburn and their three children Jackson, 19, Ava, 13, and River, 12.

The news – which is yet to be confirmed by the Today show host or his wife – comes one day after Karl and Jasmine marked their first wedding anniversary, having tied the knot in a luxurious ceremony in Mexico in December 2018.

Taking to Instagram on Sunday morning, Jasmine shared a series of 10 previously unseen photos from their wedding day, alongside a sweet caption which read: “Happy Anniversary my love! Such a beautiful journey with you. I’m so lucky to be navigating this world with you by my side. I love you.”

Happy Anniversary my love! Such a beautiful journey with you. I’m so lucky to be navigating this world with you by my side. I love you 💗

The photos shared by Jasmine included a beaming image of the newly married couple walking hand in hand down a set of steps at their luxurious wedding venue last year, while another shows them locking lips on the beach as fireworks shine in the sky above their heads.

Another image shows Jasmine posing with her family, including sister Jade who acted as her Maid of Honour, while another shows the new Mr and Mrs Stefanovic posing with Karl’s entire family including brother Peter Stefanovic and his wife Sylvia Jeffreys.

On Sunday,News.com.au claimed that Jasmine had attended a secret baby shower in New York, publishing photos taken from Instagram which the outlet claimed showed Jasmine cradling a baby bump.

According to the news outlet, photos emerged on Instagram showing Jasmine cradling a baby bump, however the couple have not publicly announced that they are expecting a child.

Karl, who is set to return to the helm of Channel Nine’s Today show in the New Year, was previously reported to have undergone a vasectomy reversal after tying the knot with the Mara & Mine shoe designer. Earlier this year it was claimed that the newlyweds were trying for a child together.