Johnny Cash’s California ranch goes up for sale at $2.5 million 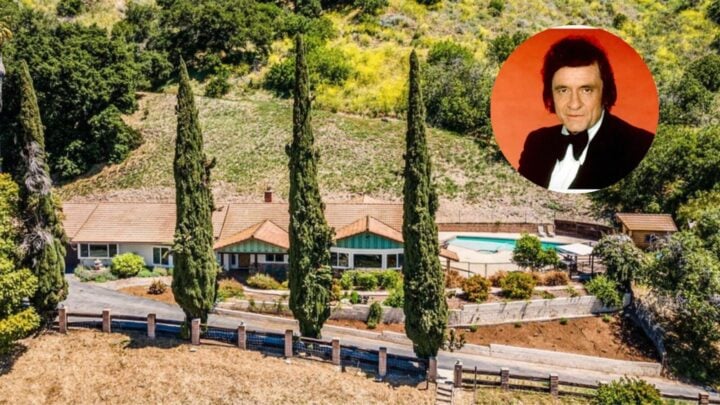 Many of Cash's original details have been preserved. Source: Douglas Elliman | Getty

The home of late country music legend Johnny Cash has been freshly listed on the market for AU$ 2.5 million (US$1.7 million) and boasts an abundance of original details.

Cash and his then-wife Vivian had first purchased the charming ranch-style residents in Ventura, California, in 1961.

Cash built the Ventura County home as his quiet, easy-going place to escape the busy and buzzing life of stardom.

Overlooking the quaint town of Casitas Spring, the 4,500-square-foot, five-bedroom home was reportedly built to the singer’s exact specifications and includes unique design stylings ranging from a wall-mounted turntable to custom wood built-ins in the kitchen and living room.

But that’s not all, many of Cash’s original details have been preserved, including the home’s painted ceiling imbued with glitter and a curved brick fireplace. The property also features a wood-panelled studio where Cash would work on his hit songs.

“The minute you walk through the front door, you are transported into Johnny’s living room,” he adds.

“From the record player that pulls out of the wall to the intercom system, to the wagon wheel light fixtures, this house was designed by the legend himself. Decades later, his essence lives on through the four walls. It’s a timeless piece of history.”

Outside the magnificent home, the property offers a swimming pool, livestock-ready fields, a long and private driveway, and a breathtaking view of the Ojai Valley.

Local lore has it that the Ring of Fire singer was known to sometimes set up speakers on the outside of his home, “playing concerts for the townspeople down below”.

Cash, Vivian, and their three daughters called the ranch home for many years until the pair divorced in 1966.

According to Wall Street Journal, after the divorce, Vivian had reportedly sold the property in the early 1970s. The home’s current owners had bought the home in 2003 for $739,000.

With the home exactly how Cash envisioned and personal touches still preserved to this day, the listing agents note that the music legends spirit still looms large on the property.

Are you a fan of Cash's home design?