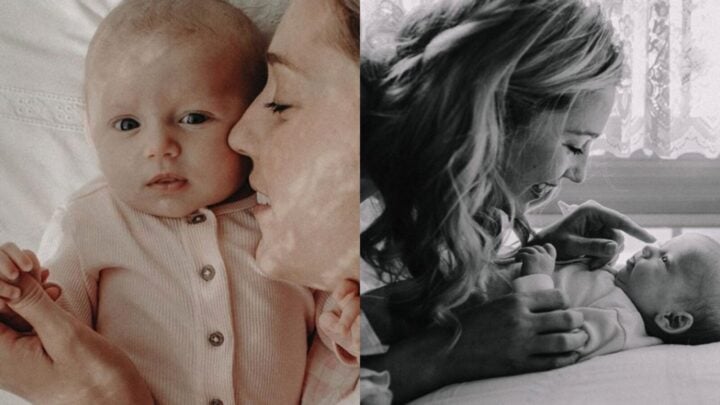 Jasmine Yarbrough and husband Karl Stefanovic welcomed their first child together just over four months ago, and on Wednesday the first-time mum shared a brand new photo of beautiful baby Harper relaxing in a striped onesie.

The 36-year-old shoe designer posted the image on Instagram Wednesday night, with the caption: “Hump Day Vibes!” She added the hashtag: “Rancho relaxo.” The sweet photo shows baby Harper resting on the carpet with her hands behind her head.

Jasmine’s sister-in-law Sylvia Jeffreys, who also recently welcomed her first child Oscar into the world with Karl’s younger brother Peter, was first to comment on the adorable post, writing: “Loooooove.”

Fans were also quick to comment, with one writing: “Oh my gosh.” Another added: “She’s a cutie pie.” And a third wrote: “That pose.” While another commented on how much bigger Harper now looks, writing: “She’s growing so fast.”

The new picture comes a day after Today show host Karl revealed that Harper has started eating solids in the weekly newsletter for the popular breakfast program.

“Little Harper May has expressed great interest in solid foods,” he wrote. “The little one has been eyeing off the avocado smash for some time now and yesterday we finally relented. Awww… our little girl is growing up. If any of you have any advice on the best solid foods for bubs I’m all ears.”

This isn’t the first time Jasmine has treated fans to a new picture of baby Harper. In July, Jasmine took to social media to share two new pictures of Harper, writing “My little [sunshine]” alongside a sun emoji. In the first image, Jasmine can be seen snuggling up to her little bub, while the second image shows Harper half smiling at the camera.

Many fans were quick to comment on the cute post, with one commenting: “She is so beautiful Jas! Congratulations.” While another added: “She’s absolutely perfect.”

Do you remember when your kids were this little?