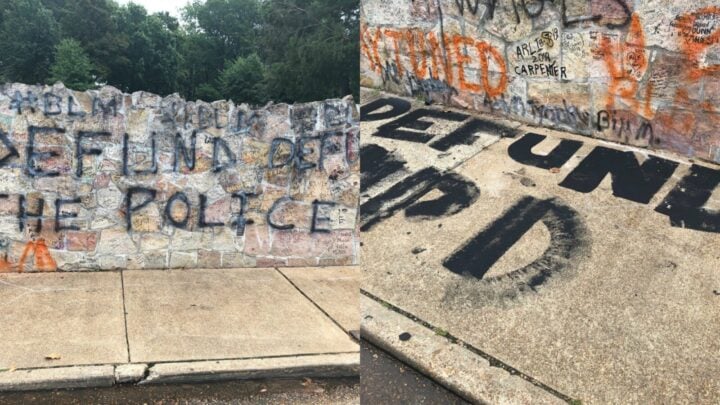 Elvis Presley’s Graceland mansion in Memphis, Tennessee has been targeted by vandals who spray-painted protest slogans on the iconic landmark, according to multiple reports. Slogans such as “F*** Trump”, “Defund the police” and “Black Lives Matter” have been scrawled across the walls surrounding the estate, which was transformed into a museum dedicated to the singer after his death in 1977.

According to Billboard magazine, the graffiti was discovered on Tuesday morning and covers up many of the messages left by visitors. The city’s Levitt Shell amphitheatre located in Overton Park, where Elvis had his first paid performance, was also targeted by vandals. Memphis police are investigating the incident.

Elvis’ stepbrother Bill Stanley told WMC-TV he was appalled by the messages.

“This is totally uncalled for,” he said, according to The Associated Press. “One of the saddest days of my life. I mean, besides the day that Elvis passed away, this right here is right up next to it.”

Many people have also taken to social media to criticise the vandals, with American singer Travis Titt writing on Twitter: “Anyone who personally knew Elvis will tell you that he absolutely loved the black community and the black community loved him. It breaks my heart to see his memory tarnished this way.”

Meanwhile, fan @LizaLang_ wrote: “This is so heartbreaking… This is not the way for this movement to get justice. Breaking stuff and vandalism is never the solution.” And @elskemccain said: “So disrespectful to the King.”

It comes just a few months after Elvis’ look-alike grandson Benjamin Keough took his own life. The 27-year-old reportedly died from a self-inflicted gun wound. Benjamin’s mother is Elvis’ daughter, Lisa Marie Presley, while his father is singer-songwriter, Danny Keough.

Lisa’s manager Roger Widynowski confirmed the death in a statement at the time, telling TMZ: “She is completely heartbroken, inconsolable and beyond devastated but trying to stay strong for her 11-year-old twins and her oldest daughter Riley. She adored that boy. He was the love of her life.”

The low-key Benjamin shared a strong resemblance to his late grandfather, with his mother Lisa telling CMT in 2012: “Ben does look so much like Elvis. He was at the Opry and was the quiet storm behind the stage. Everybody turned around and looked when he was over there. Everybody was grabbing him for a photo because it is just uncanny.”