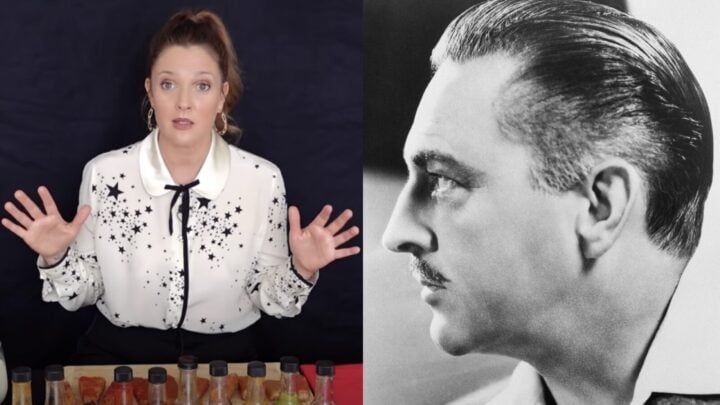 Hollywood actress Drew Barrymore confirmed a bizarre rumour about her grandfather, Grand Hotel star John Barrymore, this week – as she admitted that John’s pals stole his corpse from the morgue after his death in 1942, in order to give him “one last party”.

According to reports out of the US, the story about Barrymore’s corpse being taken from the morgue has been a long-running rumour. But, almost 70 years after his death, his 45-year-old granddaughter has finally confirmed it to be 100 per cent true.

The E.T. actress, who is descended from a hugely successful theatrical family, revealed the shocking tale on YouTube series Hot Ones on Friday, which sees famous guests being interviewed while they eat progressively spicier chicken wings.

According to Barrymore, a group of Barrymore’s friends took his body and propped him up against a poker table – with Errol Flynn, comedian WC Fields and poet Sadakichi Hartmann alleged to be the culprits. She also admitted that she’d heard another rumour that her grandfather may have been the inspiration behind 1989 movie Weekend At Bernie’s.

“They did! And I will say this, I hope my friends do the same for me,” Drew told Hot Ones host Sean Evans. “That is the kind of spirit I can get behind: just prop the old bag up and have a last few rounds.”

Barrymore added: “I think death comes with so much morose sadness, and I understand that, but if it’s okay, just with me, if everyone can be really happy and celebratory and have a party, that would be my preference.”

Throughout his career, Drew’s grandfather starred alongside some of the biggest names in Tinsel Town, including Greta Garbo, Joan Crawford and Jean Harlow. His parents were both actors and John’s brother Lionel and sister Ethel also enjoyed successful acting careers.

Have you seen any of John Barrymore's movies?