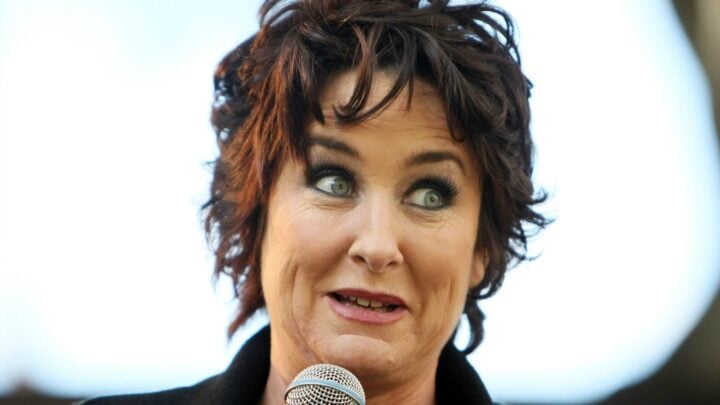 Australian comedian Fiona O’Loughlin surprised viewers with a brand new look earlier this week after she appeared on The Morning Show to promote her newly-released memoir, Truths from an Unreliable Witness, in which she details her battle with alcoholism.

The I’m A Celebrity… Get Me Out Of Here! 2018 champion looked completely unrecognisable, sporting an ashy blonde pixie cut instead of her usual long brunette locks. The 57-year-old mum-of-five also wore a pair of thick rimmed navy-blue glasses — and, let’s just say it’s a far cry from her I’m A Celebrity days.

Speaking about her new book, Fiona told presenters Larry Emdur and Kylie Gilles that she decided to write the memoir to “explain myself to loved ones” and open up about her battle with alcoholism.

“I knew that I really wanted to write about this shocking part of alcoholism which is the relapsing that goes on,” she said. “It’s a symptom of the disease and it’s heartbreaking.”

Fiona went on to say she relapsed several times a year every year for more than a decade, adding that her relapse “would last anything from five days to a week”.

The comedian also recalled the desperate moment she relapsed in the jungle, in which saw her drink hand sanitiser. “I knew I couldn’t not write about that,” Fiona said. “It’s such a crazy thing to do.”

Australian comedian Fiona O’Louglin opens up about her alcoholism and path to sobriety, as detailed in her honest and frank new book. pic.twitter.com/JMy4nN9pnh

Fiona’s appearance comes one year after the comedian landed herself in hot water after she launched a shocking attack on the Irwin family, blasting everyone from late ‘Crocodile Hunter’ Steve to his daughter Bindi.

Fiona made the comments on The Little Dum Dum Club podcast while she was reflecting on backlash she received in 2010 when she criticised Bindi Irwin on the ABC quiz show Spicks and Specks, labelling the then-11-year-old “a bit creepy” and a “freak show”.

“I said [Bindi] was a freak,” Fiona recalled. “Let’s call a spade a spade. You don’t run around the world talking like that without being bonkers. Fun, but bonkers.”

Are you a fan of Fiona O’Loughlin?