‘Decided to call, did ya!’ AFL star berated by mum in hilarious video call 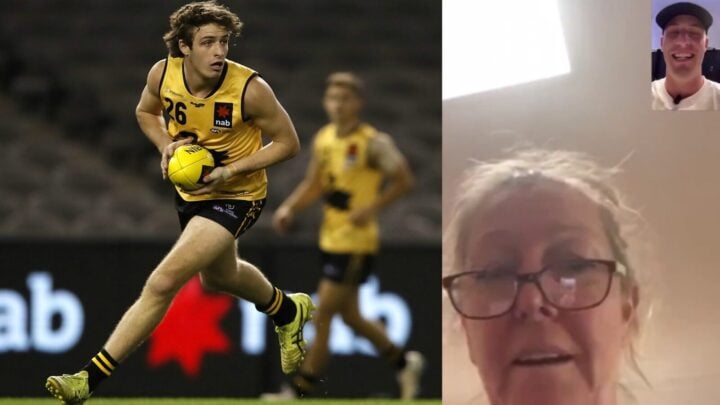 Any parent who has had a child move away will understand the frustration of waiting for them to call, and sometimes days or even weeks can pass by before you hear from them again. And one young AFL star was on the receiving end of a hilarious ear-bashing from his mother this week for doing just that.

Collingwood rookie Trey Ruscoe called his mum Fiona on Wednesday to share the news that he’d been called up to the squad, and was set to play his first game on Thursday. However Trey’s mum didn’t give the 18-year-old a chance to share his news before she began grilling him for not calling sooner.

“Oh I see, decided to ring did ya,” Fiona, from Perth, jokes at the start of the call, to which Trey insists he had called just a few days ago. “How about a phone call every now and then?”

“It’s going pretty well, I’ve just got something to tell ya,” Trey says. His mum then says: “What love? What have you done? What do you want?”

The footy star then tells his mum he is playing his first game tomorrow, to which she replies: “Oh f**k off! Are you joking? Oh my god Trey, that is unbelievable. Are you stirring me up?”

The proud mum then jokingly asks her son whether “the whole team fell over”, which triggers an outburst of laughter from a selection of Trey’s teammates who are gathered around listening to the call. She then tells her son not to “be a big wuss” when he plays against Sydney at the Gabba tonight and to “do the colours proud”.

@ AFL players in hubs: remember to call your mum once in a while.

😂 The moment Trey Ruscoe called his mum to let her know some news. pic.twitter.com/8fxmpoHB52

Her incredible reaction was shared online by Collingwood and the video attracted widespread attention. “Lol [at] did the whole team fall over or something, best mum moment of all time, and the reaction from the team lol,” one person wrote.

Another user wrote: “Gotta love Mum. ‘How did you get selected? Did the whole team fall over?'” While another said: “What a mum! Give it your all for mum and the team Trey, and make her proud.” While other thanked Trey’s mum for “lightening up the internet”.

“Hahahahaha, this is brilliant! Make sure to give our thanks to Trey’s mum for helping lighten the internet up a bit!” one person said.