‘We didn’t get on’: Fassnidge opens up on rumoured feud with Feildel 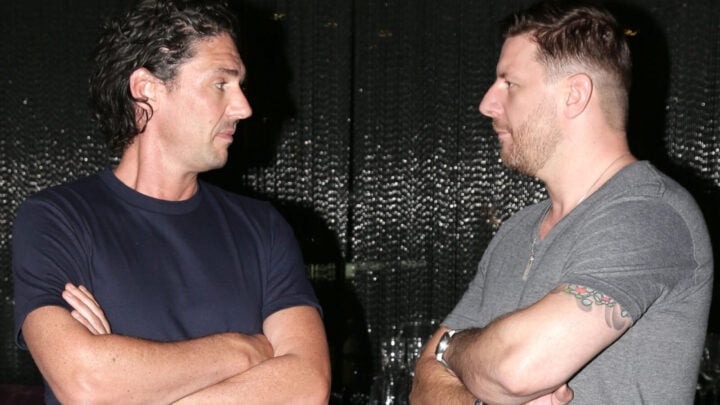 Celebrity chefs Colin Fassnidge (left) and Manu Feildel were less than friendly with each other for many years. Source: Getty.

Celebrity chefs Colin Fassnidge and Manu Feildel may be best buds now, but they haven’t always seen eye-to-eye. In fact, before Colin’s stint on the popular reality cooking show My Kitchen Rules (MKR), which Manu judged alongside controversial chef Pete Evans, the pair fought publicly with one another.

Colin is now set to open up about the infamous feud on Channel Ten’s I’m a Celebrity … Get Me Out Of Here! tonight, and news.com.au has been given an exclusive first look.

“Me and Manu didn’t get on,” he tells camp-mate Grant Denyer, news.com.au reports. “I don’t know. We just never stopped fighting.”

However, that all changed for both chefs after Colin joined MKR as a guest judge in 2015. It wasn’t a quick reconciliation, however, with Colin saying it took a couple of months of working together before they put their difference behind them.

Colin went on to say that Manu made it very clear early on that the show was, in fact, “his baby”, telling Colin, “Well buddy, welcome to my home. If there’s anything you need, I’ll tell you how to do it.”

However, towards the end of the season, a fed-up Colin finally put an end to the ongoing feud and apologised for any wrongdoing, and the rest was history!

“All the wives hang out, the kids hang out … we’re like, ‘Why did we waste so long getting to know each other?'” he explained.

So, what caused the feud in the first place? Well, according to news.com.au, it all started in 2011, when Manu competed on and won Dancing with the Stars. Apparently Colin had some not-so-friendly things to say about the French-born chef at the time.

“If you do these things, it’s got to be on your own terms and not be (made to look) a fool, like making you wear a clown suit and dance around a studio,” he reportedly told The Sunday Telegraph back in 2011. “Look, I don’t knock your man Manu, but he’s not going to go back in the kitchen again … and that’s fine, he’s changed careers. He’s going to make a lot of money out of that, but don’t go back and say you’re a full-time chef.”

Are you a fan of Manu and/or Colin?