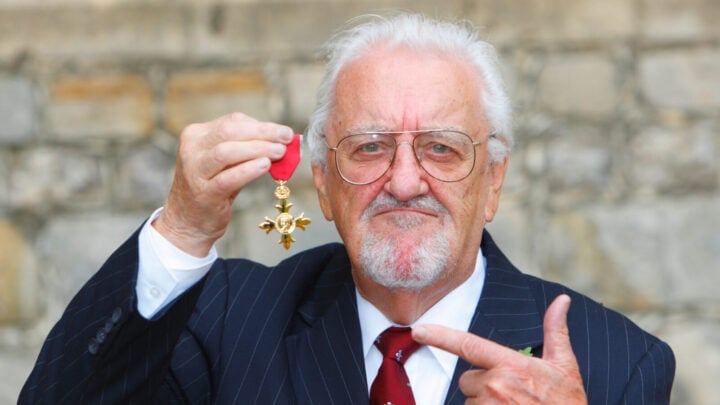 Bernard Cribbins has passed away at age 93. Source: Getty

Esteemed British actor Bernard Cribbins, known for his role as The Wombles narrator, starring in Doctor Who and Fawlty Towers has died, age 93.

“Beloved actor Bernard Cribbins OBE has passed away at the age of 93,” the statement read.

“His career spanned seven decades with such diverse work ranging from films like The Railway Children and the Carry On series, hit 60’s song Right Said Fred, a notorious guest on Fawlty Towers and narrating The Wombles. He worked well into his 90’s, recently appearing in Doctor Who and the CBeebies series Old Jack’s Boat.

“Bernard’s contribution to British entertainment is without question. He was unique, typifying the best of his generation, and will be greatly missed by all who had the pleasure of knowing and working with him. ”

Cribbins was born in 1928 in Oldham, northwest England, leaving school at a young age to start his career.

The cherished actor began his acting life as a stage manager, taking minor roles in his regional theatre, leading to a diverse catalogue of roles ranging from children’s shows to comedies such as the 1960 film Two-Way Stretch, and even starred in Alfred Hitchcock’s 1972 thriller, Frenzy.

Doctor Who screenwriter and dear friend of Cribbins shared a touching tribute to the star on Instagram.

Sharing an image of the actor in his role “as Snout in A Midsummer Night’s Dream”, the screenwriter continued his tribute.

“D’you fancy doing some Shakespeare, Bernard? ‘Let me see the script.’,” he wrote.

“He knew everyone! He’d talk about the Beatles and David Niven, and how he once sat on the stairs at a party impersonating bird calls with T H White. Then he’d add, ‘I said to Ashley Banjo last week…’.

“He loved being in Doctor Who. He said, ‘Children are calling me grandad in the street!’ His first day was on location with Kylie Minogue, but all eyes, even Kylie’s, were on Bernard.

“He’d turned up with a suitcase full of props, just in case, including a rubber chicken. And what an actor. Oh, really though, what a wonderful actor. We once took him to the TV Choice Awards and sent him up on his own to collect the award, and the entire room stood up and cheered him. That’s a lovely memory.

“He’d phone up and say, ‘I’ve got an idea! What if I attack a Dalek with a paintball gun?!’ Okay, Bernard, in it went!

“He loved Gill with all his heart; he mentioned her in every conversation we ever had. A love story for the ages.

“I’m so lucky to have known him. Thanks for everything, my old soldier. A legend has left the world.”

Tributes for Cribbins have continued to flow since the news of his death.

Bernard Cribbins breathed life into the burrow, his voice was the soundtrack to our lives. We love him, and will miss him. Bernard, you will always be part of our Womble family. ❤️- Great Uncle Bulgaria pic.twitter.com/uGHAcz5J9G

Really sad after knowing about the passing of Bernard Cribbins. My condolences to his family, friends, and all his fans. pic.twitter.com/tv7ZQ3NSVs

Bernard Cribbins just gave warmth to everything he was in. He made every scene 1000x better. He was the nations grandad. Truly a wonderful man ????

One of my favourite scenes in television featuring him

Heartbroken to hear about the passing of Bernard Cribbins.

This man was such a special, unique, beloved talent in the world. He will be remembered by many generations, forever.

My thoughts are with his family and friends. RIP to a wonderful man. pic.twitter.com/N8O6lR75Dy

Bernard Cribbins is responsible for the only scene in Doctor Who that has genuinely made me cry. I was so moved by his performance as Wilf as he was able to express so much emotion with so few words.