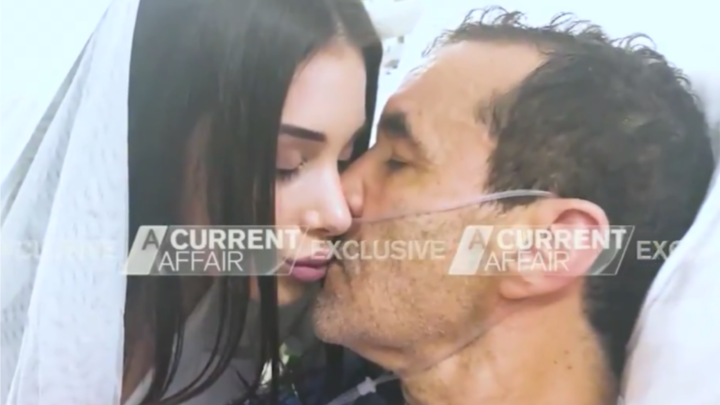 The miraculous moment boxing legend Jeff Fenech surprised his friends and family by making a last-minute arrival to walk his daughter down the aisle at her wedding has been captured on camera, just 10 days after he underwent life-threatening heart surgery.

The 55-year-old boxer was forced to undergo the risky operation in Bangkok, Thailand, after being rushed into hospital on October 4 when he began coughing up blood at a training camp. It was later discovered he had a blocked heart valve, requiring urgent open heart surgery to save his life.

Nine’s A Current Affair has since shared a teaser clip from Monday night’s episode, revealing how his daughter Jessica, her sister and wife Suzee flew to Thailand before her official wedding day for a secret ceremony by his bedside – sure at that point that he wouldn’t make it on the day. However, the program has since confirmed he made a last minute arrival in time to walk her down the aisle in Sydney at the weekend.

He almost didn't make it, but just ten days after undergoing life-saving heart surgery Jeff Fenech stunned guests by walking his daughter down the aisle at her wedding today. #9ACA pic.twitter.com/CiM2INL9jS

The teaser video shows Jessica linking arms with her proud father, wearing a show-stopping white lace dress with floral detailing and a dramatic veil. Fenech looks emotional in a smart tux and black cap, as he’s seen briefly touching a guest’s hand as he walks by.

According to The Daily Telegraph, Fenech had been preparing to watch Saturday’s ceremony at St Mary’s Cathedral by Skype. However, he stunned his loved ones when he appeared in time to take part.

Jessica managed to surprise her father just days earlier when she appeared in a short white dress and veil by his hospital bedside in Bangkok for a secret early ceremony with her new husband. She was walked inside by her mother Suzee, with A Current Affair once again filming the entire moment first-hand.

MONDAY. #9ACA.
It's the ceremony that floored a champ. pic.twitter.com/rk5IYkatsi

Jessica’s sister Kayla has shared a series of photos from the special day on Instagram, after previously posting a photo of her father amid his recovery in Thailand. The snap shows Fenech with his fists up in the air and flashing a beaming smile, wearing an open hospital shirt to show a huge bandage across his chest.

“My biggest inspiration is my father. I am so proud of you and how far you have come since your operation. You are a true champion. Can’t wait till you get back home. Love you #champion #fighter,” she wrote.

My biggest inspiration is my father. I am so proud of you and how far you have come since your operation. You are a true champion. Can’t wait till you get back home. Love you 💕 #champion #fighter

According to The Mail Online, Fenech had to be operated on in an elevated position so fluid could be drained from his lungs while the infected valve was repaired. Kayla kept her followers up to date on Instagram at the time, sharing a montage of photos of them together and writing: “Thinking of you non stop. Love you so so much. See you very soon. Can’t wait to give you a big cuddle, kiss and to just be by your side. You’re going to pull through this dad. You’re the strongest man I’ve ever known.”

Fans have been flooding the family with support ever since, with one commenting: “He is a legend kay , knew he would pull through.” Meanwhile another added: “Such great news!” and one wrote: “Never lets us down does he! So happy to hear the good news.”

Do you have a message for the family? Have you followed Jeff Fenech's career?