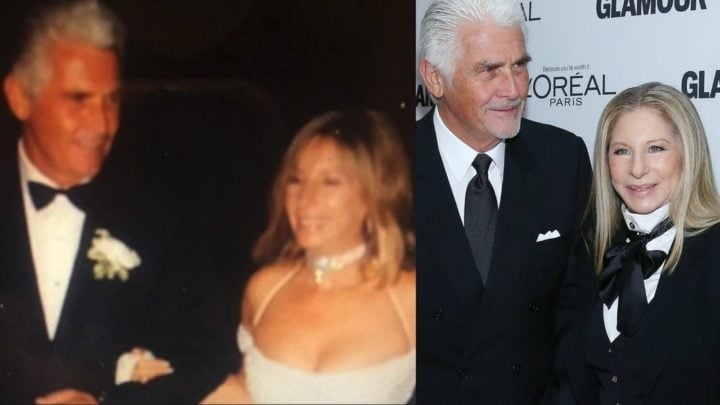 The famous couple tied the knot back in 1998. Source: Getty/Instagram - Barbra Streisand

Hollywood marriages rarely tend to stand the test of time but Barbra Streisand and James Brolin have proven that they’re the real deal.

This week the A Star Is Born actress took to Instagram to reflect on their time together with an adorable snap of the pair in celebration of their 21st wedding anniversary.

The singer posted a stunning photo of herself and Brolin from their wedding day, with the caption: “23 years together… and 21 years married today.”

In the glamorous shot, Streisand can be seen wearing a beautiful off-the-shoulder white gown that featured a cinched-in waist and dramatic train, coupled with a standout diamond chocker necklace. Meanwhile, Brolin looked dashing in a classic black tuxedo.

Fans were moved by the beautiful post with many leaving congratulatory comments for the pair on their anniversary.

“You are not only blessed with the voice of an angel, but graced with a marriage to the LOVE of your life! Congrats!” one commentator wrote.

Another added: “Wishing you many more years together!” While a third wrote: “Congratulations to you two. So happy for you.”

The famous couple tied the knot back in 1998 in a beautiful ceremony in the Streisand’s estate in Malibu, California. While they have no children together, Brolin has three grown kids from previous relationships, and Streisand shares a son, Jason, with her first husband American actor Elliot Gould.

They regularly speak openly about their love with one another and Brolin recently revealed why their relationship works.

“If you look at Cancer and Taurus – not that I’m into astrology, but I’ll click on that if I’m on the computer – almost every time, it says, ‘You guys are magic together’,” he told Fox News.

“You’re so opposite that you’re able to work it out. And that’s what a makes a great team.

“I think we’re both very opposite and very good negotiators. She sees a colour that’s one shade and I say, ‘No, it’s another colour.’ And then we are able to negotiate around it.”

“Twenty years in Hollywood is like 50 years in Chicago, I always say,” she told the news outlet.

Are you a fan of Barbra Streisand and James Brolin? Do you think they make a good couple?