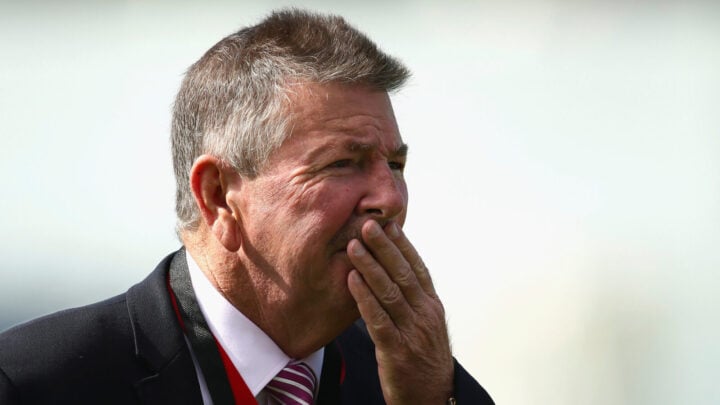 Marsh reportedly remains in a critical condition in the Bundaberg hospital. Source: Getty

Former professional Australian cricketer, Rodney Marsh, 74, was reportedly rushed to hospital on Thursday, February 24, after suffering a major heart attack on his way to a charity event in Bundaberg.

Marsh’s heart reportedly stopped beating for a number of minutes before he was rushed to the hospital where he remains in a critical condition, according to a hospital spokesperson.

According to The Australian, the Test-wicket legend suffered a major heart attack as he traveled from the Bundaberg airport to a hotel “as a guest of the Bulls Masters cricket charity.” Marsh was traveling with Bull Masters officials John Glanville and David Hillier at the time of the incident with the men are being praised for their ‘life-saving’ decision making which reportedly kept the cricket legend alive.

In an interview with The Australian, Bulls Masters boss, Jimmy Maher revealed the incident had sent shockwaves through the club and that Glanville and Hillier’s efforts had ultimately saved Marsh’s life.

“The medical staff at the Bundaberg Hospital were wonderful. We are all shocked. It’s terrible,” said Maher.

“John and Dave deserve so much credit because the doctor said if they had waited for an ambulance he would not have made it.

“Then soon Dave rang me from the car and told me what had happened. It’s devastating.’’

CEO of WA cricket, Christina Matthews released a statement regarding the incident where she expressed concern and support for Marsh’s condition.

“On behalf of WA Cricket staff and players, and the wider cricket community, I would like to pass on our heartfelt thoughts to Rod and his family.

“He’s a much-loved husband and father – and remains one of the wicket-keeping greats of our game.

“We hope he’s able to make a full and speedy recovery.”

“We are very concerned to hear the news about Rod and send him our best wishes,” Hockey said.

“Our thoughts are with Rod, his wife Ros, their family and many friends at this difficult time. Rod is one of the most iconic and popular figures in the game, we thank and acknowledge those who are caring for him.”

Marsh is famous for his outstanding cricket career, representing Australia as a wicketkeeper in 96 Test matches and 92 ODI’s between 1970 and 1984. Throughout his career, he has scored 3633 Test runs and achieved 343 catches and 366 dismissals, securing his reputation as one of Australia’s most renowned cricket legends. He is known for his outstanding combination with bowling teammate Dennis Lilee, the pair yielding an extraordinary number of Test wickets throughout their partnership.

The cricket legend retired in 1984 before working in multiple other non-playing cricket roles. Between 1986-1990 and 1996-1998, Marsh worked as a cricket commentator for Channel Nine’s international matches.

Marsh was also a coach and director at the Australian Cricket Academy in Adelaide for a number of years before becoming director of the England and Wales Cricket Board National Academy between 2001-2004 where he grew the team’s success substantially – Wales finally winning against the Australian Ashes in 2005 after 16 years of the title in Aussie hands.

He has since been appointed to a number of other cricket roles including being appointed as chairman of selectors for Cricket Australia in 2014 and working as manager of their elite coaching development program.

Do you have a message of support for the cricket legend?