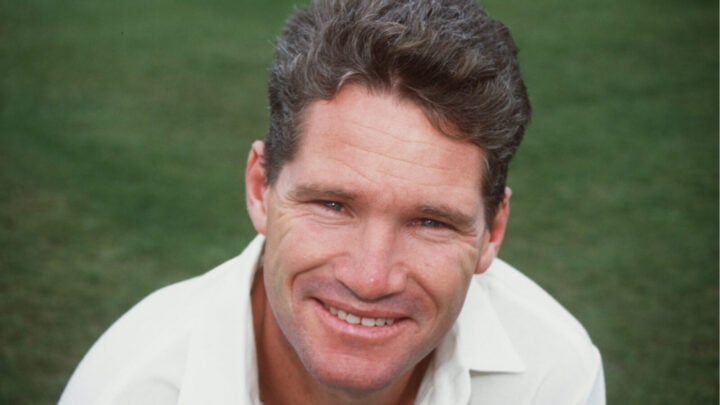 Australian cricket legend Dean Jones tragically passed away on Thursday after suffering a fatal heart attack in Mumbai. The 59-year-old was working in India for broadcaster Star Sports where he was commentating on the IPL alongside former player Brett Lee.

According to multiple reports, Jones suffered a heart attack in the lobby of a Mumbai hotel and Lee attempted to save him by performing CPR. He was rushed to hospital via ambulance but sadly could not be saved. However Lee honoured his colleague and returned to the commentary booth just hours after the distressing incident, saying Deano would have “wanted us to be here tonight”.

“It’s pretty much the ‘Select Deano’ we call it. It’s Deano’s dugout tonight,” Lee said. “He is an absolute legend. Firstly to his family and friends we send our condolences. It’s a real tough day for everyone, not only for his close mates … and the whole cricketing world in general.

“What Deano would’ve wanted is for us to come out here in the dugout, get it done, have some fun for the game we all love.”

Jones was one of Australia’s most loved cricket stars and was part of the Australian team that won the 1987 World Cup against all odds, beating rivals England in the final.He is also credited with revolutionising the way the one-day game is played.

Star Sports issued a statement following Jones’ death, describing Jones as a “great ambassador of the game”. The statement read: “It is with great sadness that we share the news of the passing away of Mr Dean Mervyn Jones AM. He died of a sudden cardiac arrest.

“We express our deep condolences to his family and stand ready to support them in this difficult time. We are in touch with the Australian High Commission to make the necessary arrangements.”

It continued: “Dean Jones was one of the great ambassadors of the game associating himself with cricket development across South Asia. He was passionate about discovering new talent and nurturing young cricketers. He was a champion commentator whose presence and presentation of the game always brought joy to millions of fans. He will be sorely missed by everyone at Star and  his millions of fans across the globe.”

Tributes flooded in for Jones from the cricketing world and further afield. Michael Vaughan said: “We have all been sent another message to enjoy life today … We are a strong cricket family that must remember to enjoy our time & especially family a lot more … Dean Jones was a great great cricketing guy … will be greatly missed … #RIPDeano.”

Victorian Premier Daniel Andrews wrote on Twitter: “Dean Jones was the epitome of grit, determination and sheer fight. He rewrote the rulebook for the one-day game – and should have been picked for many more than his 52 Tests. A legend of sport. A legend of this state. And we love him ’cause he’s Victorian.”

Comedian and broadcaster Andy Lee said: “I was never allowed to be Dean Jones in the backyard cause my older brother would always dibs him! And Cam then smacked me round like Deano did to so many bowlers. Loved watching Deano. You changed the game!”

And former Labor leader Bill Shorten tweeted: “Very sad to hear of passing of Dean Jones. Inspirational batsmen and great Victorian. Such a big part of the iconic summers of cricket that live in the nation’s collective memory. Thoughts with his family & loved ones.”

Are you a cricket fan?