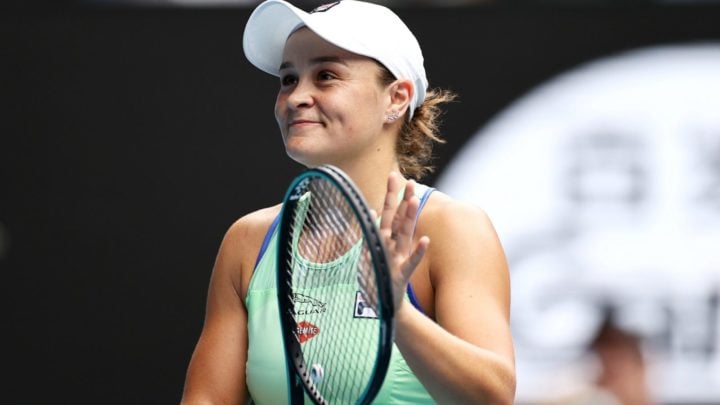 Ash Barty credited her parents for her success. Source: Getty.

Aussie champion tennis player and world female number one Ash Barty has been named Young Australian of the Year. The 23-year-old from Ipswich in Queenland, who is in Melbourne fighting to win the Australian Open, received the honour for her inspiring sporting achievements.

Due to her Melbourne Park campaign, Barty wasn’t in Canberra to accept the award last night, but instead 2002 Australian of the Year Pat Rafter presented it to her in an interview room at the Open.

“To be Young Australian of the Year is unbelievable,” Barty said, according to News.com.au. “Very, very humbling. I don’t think I’m deserving of it… I’m just trying to be me.

“All of my values that I’ve lived by and try to live by every single day, regardless of whether it’s in sport… all come from mum and dad,” she said.

“It’s about being humble and respectful, and giving it a crack — trying to be the best you can be, and that’s all you can ask of yourself.

“Ash Barty is the world’s No.1 tennis player, a champion athlete and an extraordinary young woman doing our nation proud. Her achievements are inspiring young Australians to follow their dreams.”

It’s been an incredible year for Barty, who became the second Australian woman to be crowned world number one, after Evonne Goolagong Cawley. The pair are now the only Australians to top the WTA rankings since they were introduced in 1973 — with Goolagong Cawley staying number one for a fortnight in 1976.

Barty rose to the top in June last year after winning the Nature Valley Classic in Birmingham in the UK, beating German tennis player Julia Goerges 6-3 7-5. However, despite her own mammoth success, Barty remained humble and gave a moving speech dedicated to her opponent.

She told Goerges: “I couldn’t think of a better person to share the court with. You’re one of my best friends on tour and you’ve been there for me since I was a little ‘tacker’.”

Are you proud of Ash Barty? Do you have a message for her?