From twerking to wolf howls and a feather frenzy, the Oscars did not disappoint 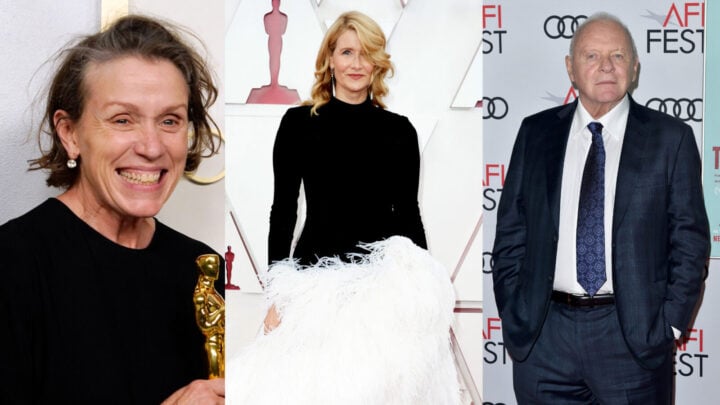 From far-out fashion to no-show actors, the 2021 Oscars was far from boring. Source: Getty

From Glenn Close’s twerking to Frances McDormand’s howling like a wolf during her acceptance speech, it was a bizarre but incredibly entertaining night on Monday in Hollywood for the 93rd Academy Awards.

McDormand, Anthony Hopkins and the film Nomadland took out the three major awards of the night, with the drama winning Best Picture, and Hopkins receiving Best Actor for his performance as an elderly man with dementia in The Father. Surprisingly, the screen icon did not attend the ceremony.

At 83, Hopkins is now the oldest person to have won an Oscar for acting, a title previously held by the late Christopher Plummer, who was 82 when he won for Beginners at the 2012 Oscars. Hopkins also won the award for Best Actor in 1992, for his role as Hannibal Lecter in The Silence of the Lambs.

In the category of Best Actress in a Leading Role, it was 63-year-old McDormand who took out the Oscar for her performance in Nomadland, delivering a brief speech in which she quoted Shakespeare’s Macbeth. “I have no words. My voice is in my sword. We know the sword is our work. And I like work. Thank you for knowing that. And thanks for this,” she said.

The Academy Award is McDormand’s third win in the category, tying her with screen legends Meryl Streep and Ingrid Bergman, who have also taken out Oscars for acting three times. The actress currently holding the record is Katharine Hepburn, who won the title of Best Actress four times.

While her speech might have been unusual enough, McDormand also chose to finish it off with a wolf howl — in tribute to Michael Wolf Snyder, Nomadland’s production sound mixer, who tragically died by suicide in March at age 35.

“Please watch our movie on the largest screen possible,” McDormand said. “And one day very, very soon, take everyone you know into a theatre, shoulder to shoulder in that dark space and watch every film that’s represented here tonight. We give this one to our Wolf,” the actress concluded, before throwing her head back and howling, incredibly realistically, like a wolf.

Bet you didn’t have Frances McDormand howling like a wolf in her Best Picture acceptance speech on your #Oscars bingo card.https://t.co/sdgeoBK7lX pic.twitter.com/O0CWmjhLfP

Laura Dern made quite the appearance on the red carpet, with a white ostrich feather gown reminiscent of singer Bjork’s infamous ‘swan gown’ from 20 years ago. The 54-year-old actress paired the eccentric Oscar de la Renta number with shoulder-duster earrings and a set of black, strappy jewel-encrusted heels.

Model Paulina Porizkova also stunned on the Oscars red carpet, however, it was her date that had tongues wagging. The 56-year-old used the event to debut her relationship with Academy Award-nominated screenwriter Aaron Sorkin. The new couple also revealed their relationship to Page Six on Friday, with the pair all smiles as they walked arm in arm at the Oscars. The Czech beauty wore a beautiful gold gown, while Sorkin, 59, donned a dapper black suit.

Glenn Close may not have won any awards, but fans have declared that she undoubtedly “won the night” after an incredible twerking performance at the end of an Oscars music trivia segment.

The 74-year-old actress wore an interesting ensemble, pairing a long-sleeve beaded dress with pants and blue satin gloves. But it wasn’t her outfit choice that had people talking, rather her incredible dance skills – proving that despite her age she can still drop it like it’s hot.

While it’s uncertain whether it was spontaneous or scripted, the actress’ dance moves to E.U. (Experience Unlimited)’s 1988 hit ‘Da Butt’ definitely impressed fellow stars and onlookers at home.