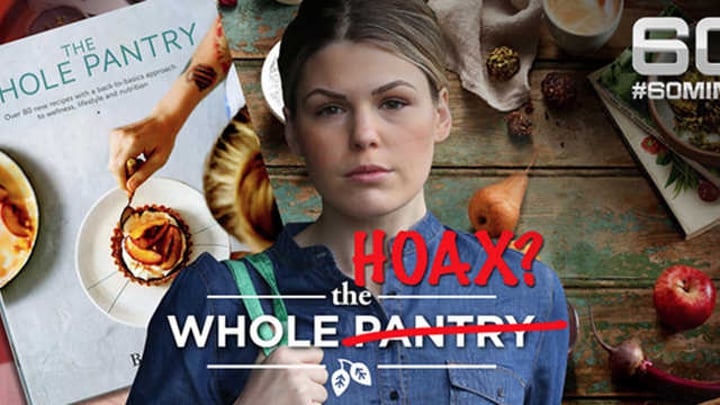 Starts at 60 readers were floored last year when it was revealed health and wellness blogger, and ‘cancer survivor’ Belle Gibson was not who she said she was.

60 Minutes caught wind of the story and interviewed Belle Gibson about her lies, and she had no excuse whatsoever for deceiving thousands of people and leading genuine cancer sufferers to believe a holistic lifestyle was better than medical treatment.

Last year she was allegedly paid approximately $45,000 by Channel Nine to tell her side of the story despite claims she failed to donate $300,000 from the sales of her wellness app, The Whole Pantry, to charity (as she had promised).

According to her life story in her book The Whole Pantry, Belle Gibson had 3 heart operations, 2 cardiac arrests, a stroke and was diagnosed with inoperable brain cancer within the space of 12 months, yet Tara Brown managed to uncover in a quick 20 minutes or less, the falsification of every part of her cancer, health, wellbeing and recovery story. It presented her as a mentally ill woman, more mentally ill than physically ill, as many were led to believe.

In the interview, Ms Gibson didn’t seem to register the seriousness of the situation she found herself in.

Almost a year later, Belle Gibson was still not facing criminal charges for rorting app users out of hundreds thousands of dollars, until now.

“The alleged contraventions relate to false claims by Ms Gibson and her company concerning her diagnosis with terminal brain cancer, her rejection of conventional cancer treatments in favour of natural remedies and the donation of proceeds to various charities,” Consumer Affairs Victoria said in a statement.

Mr Cohen said that Penguin Australia, who published her book The Whole Pantry without checking her legitimacy prior to publication, had cooperated with the 14 month investigation.

“This is an important step in ensuring that consumers receive only verified information and are not deceived, particularly where serious matters of health and medical treatment are concerned,’’ the director said.

Tell us, do you believe Ms Gibson should go to jail for what she did? Or is she just mentally ill?