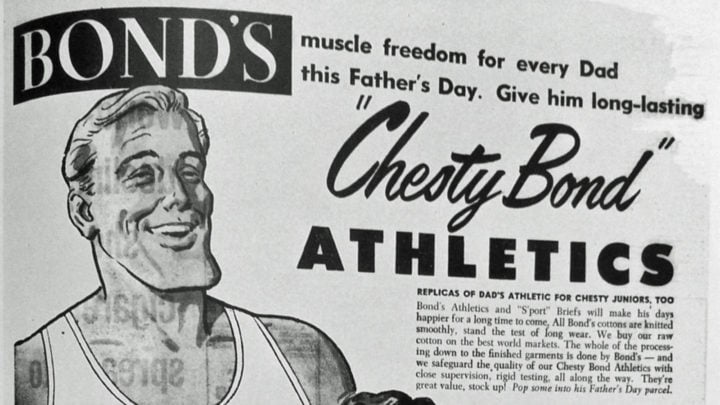 Chesty Bond was a fictional Aussie everyman who first appeared in Bonds advertising in 1938 as the archetype of Australian masculinity.

Underwear advertisements have been known to get people hot under the collar, but not like this, with iconic Australian brand Bonds at the centre of a debate over the suitability of one of its Christmas ads.

The underwear brand, which is now owned by US clothing giant Hanes, revealed its ads for the festive season earlier this week – and one includes a picture of two men, in Bonds underpants, of course, exchanging a passionate kiss on the kitchen bench, cereal bowl in hand.

The pic was captioned: “It’s the little moments that make the Christmas season so special.”

Thousands of Aussies have commented on Bonds’ Facebook post of the advertisement and while many praised the company for embracing diversity, others were outraged by the company’s decision to depict a gay couple (who are reportedly in a relationship in real life). Others felt the image, regardless of the sex of the models, was just too racy.

“Love, love, love this,” Eve Dickson wrote. “To me it’s not even about Bonds ‘taking a stand’ or ‘making a statement’. It’s just an ad depicting a couple wearing bonds, having a smooch over brekkie. As simple as that.”

“Loving the diversity in a few of Bonds’ ads lately, this might shock some people but folks in the LGBTIQ community buy underwear too,” Jess Gee commented.

“I can’t love this ad enough,” Jude Newman-Tope wrote. “Well done for being accepting and actually being with the times. If anyone at all is offended by this or have something negative to say, then they need to look in the mirror to see where the real problem lies!”

The disapproval came in equally thick and fast with some commenters threatening to boycott the undies brand.

“Ah well, Bonds is no longer part of my shopping choices in the future,” someone said. “Personal choice, and they can’t legislate that off me.”

“Something is extremely wrong here Bonds! Not the way to advertise! Definitely boycotting your brand!” another agreed.

A number said they had no problem with the same-sex couple being featured in the advertisement but that the image itself was too saucy.

“I couldn’t care less if it’s two guys, two girls or a guy and a girl … But I can’t see what’s Christmassy about it and I’m not sure why it has to be so raunchy,” Melanie Kaye wrote on the Bonds Facebook page.

A few cooler-headed commenters noted, meanwhile, that the heated debate was great for Bonds’ business – something Bonds had no doubt determined when commissioning the unusually intimate image.

Despite the thousands of comments, the ad has received relatively few official complaints.

Ad Standards, the body that regulates advertising standards in Australia, said today it had received fewer than 15 complaints about the Bonds ad. The complaints were being assessed, it added.

“Our Christmas campaign is about celebrating the bonds that make the season and those are different for every individual,” Small said. “We are a brand that celebrates all Australians and we wish the couple featured in our social post, along with everyone else an equally special and enjoyable festive season.”

What do you think of Bonds' decision to feature a same-sex couple in its advertisement? Do you support it, or not?