Thai cave rescuers announced as 2019 Australians of the Year 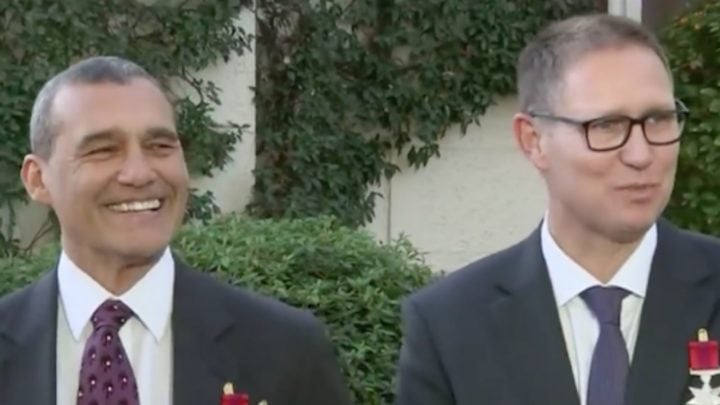 Craig Challen (left) and Richard Harris have both been named this year's Australian of the Year winner. Source: Facebook.com/7 News Adelaide

The results are in and two cave-diving medics who helped rescue a soccer team in last year’s Tham Luang Cave disaster in Thailand have been announced as the 2019 Australians of the Year.

Prime minister Scott Morrison presented the Australian of the Year Award recipients with trophies at a ceremony at the National Arboretum in Canberra on Friday evening. It is the first time two people have been jointly awarded the title since state and territory award finalists were introduced to the program in 2004.

Dr Craig Challen from Western Australia and Dr Richard Harris from South Australia were both awarded the title of Australian of the Year for their heroic efforts in the international rescue mission to save 12 boys from flooded caves in Thailand in 2018.

Anaesthetist Harris and retired vet Challen made worldwide headlines when they joined the team in Chiang Rai, Thailand, and offered invaluable advice on how to get the stranded boys out safely.

Meanwhile, Challen has dived some of the country’s deepest wreaks and has a set depths records in diving. He was named Technical Diver of the Year in 2009.

What makes the win so special is both men are mates and have been diving buddies for years. They were about to embark on a cave-diving holiday last year when they were called for help in the rescue operation. Harris had extensive medical expertise which was helpful in the operation, while Challen’s technical expertise was critical.

Both men were previously awarded the Star of Coverage for their bravery.

“Richard Harris and Craig Challen led a heroic rescue under the spotlight of the world’s media,” Danielle Roche, Chair of the National Australia Day Council, said in a statement. “They placed the safety of others above their own and inspired hope when hope seemed lost. Their selflessness, courage and willingness to help others in a time of need typifies the Australian spirit.”

As for 2019 Senior Australian of the Year, 76-year-old Suzanne Packer took home the big prize. Packer started out as a paediatrician in 1972 and has long advocated for the rights of children in the healthcare system and in the wider community.

She has worked closely with child abuse victims and was also one of the brains behind implementing child-friendly spaces in hospitals to help children recover faster and in a more homely environment.

“Suzanne Packer is a lifetime advocate for the health, safety and rights of all children,” Roche said. “Her dedication to protecting young lives has brought about practical change in treating children and has directly improved the lives of untold children.”

“The 2019 Australians of the Year are among our nation’s finest citizens,” Roche said.

On Saturday, all the winners will attend the National Flag Raising and Citizenship Ceremony in Canberra, before participating in an array of other events around Sydney.

What are your thoughts on this year’s Australian of the Year winners?