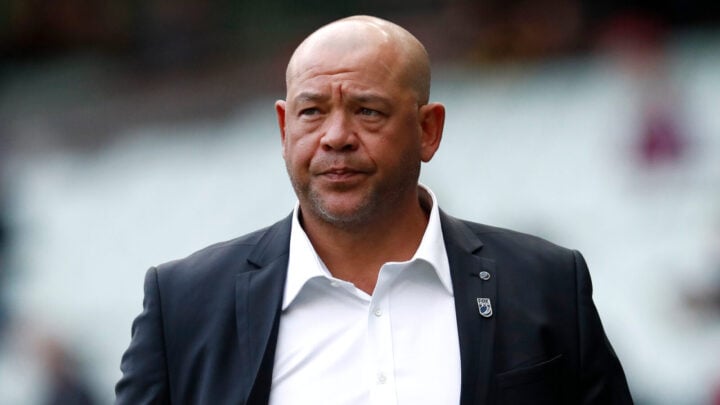 Laura commended her late husband's character, claiming "he always had time for everyone". Source: Getty Images.

Following the sudden death of cricket legend Andrew Symonds his wife Laura has delivered an emotional tribute to her late husband, revealing the family is “still in shock”.

Symonds passed away on Saturday, May 14 following a single vehicle car accident outside of Townsville, he was 46 years old.

Laura told the Courier Mail that she is “just thinking of the two kids”.

“He was such a big person and there is just so much of him in his kids,” she said.

Laura commended her late husband’s character, claiming “he always had time for everyone”.

“He was the most laid back person. Nothing stressed him out. He was an extremely chilled operator. So practical,” Laura added.

Queensland Police revealed in a statement that “emergency services attempted to revive the 46-year-old driver and sole occupant, however, he died of his injuries”.

“Early information indicates, shortly after 11pm the car was being driven on Hervey Range Road, near Alice River Bridge when it left the roadway and rolled,” the statement read.

The incident is currently under investigation by the Forensic Crash Unit.

Police are investigating a single-vehicle crash in Hervey Range, around 50 kilometres from Townsville, that taken the life of a 46-year-old man last night. https://t.co/1ShX78XbzU pic.twitter.com/2QlJlOQHQX

Tributes quickly flowed in for the late cricket icon, following the news of his passing.

“He was a cult figure to many who was treasured by his fans and friends,” Henderson said in a statement.

“On behalf of Australian cricket our deepest sympathies are with Andrew’s family, team-mates, and friends.”

We are shocked and saddened by the loss of the loveable Queenslander, who has tragically passed away at the age of 46. pic.twitter.com/ZAn8lllskK

In absolute shock. Andrew Symonds Rest in Peace. Love and support to all his family and friends.

If Roy shook your hand you had his word, that’s the sort of bloke he was and that's why I always wanted him on my team. An extraordinary player and even better human being. Can’t believe he’s gone. Thoughts are with his family at this time. pic.twitter.com/7r7FiK1CzK

Former cricketer and teammate Jason Gillespie said the passing of Symonds was “horrendous news to wake up to”.

Horrendous news to wake up to.
Utterly devastated. We are all gonna miss you mate.☹️ #RIPRoy

Just awful to hear the news of the passing of Andrew Symonds. Roy was an incredible talent and a great character of Australian sport. Loved by his teammates and fans alike, he will be sorely missed by many. My condolences to his family, friends and the cricket community.

The death of the popular all-rounder is yet another tragic blow for Australian cricket after Shane Warne and Rod Marsh passed away earlier this year.

Symonds was a key figure in Australia’s World Cup wins in 2003 and 2007. He played 26 test matches and 198 One Day Internationals.

Symonds is survived by his wife Laura and two children Chloe and Billy.