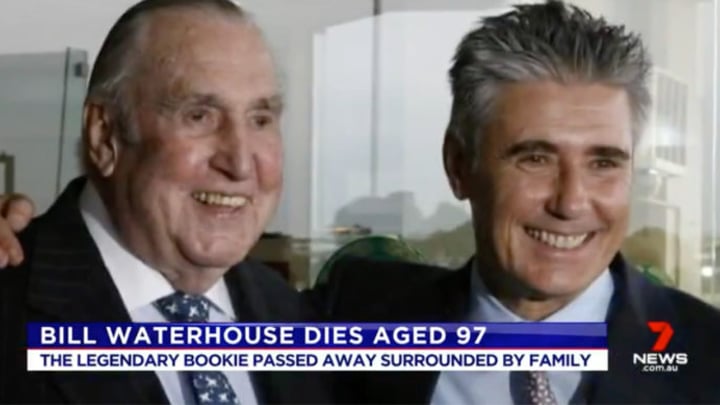 Bill Waterhouse passed away at the age of 97, surrounded by his family. Source: Twitter/ 7 News Melbourne.

Tributes have continued to pour in for legendary Aussie bookmaker Bill Waterhouse who this week passed away peacefully surrounded by family.

The 97-year-old, who was known as the biggest bookmaker and gambler in the country, has taken his last breath, with son Robbie confirming the news on Friday. Taking to social media to share the devastating news, the husband of horse trainer Gai Waterhouse, said his dad wasn’t in any pain during his last moments, after living a long and healthy life.

“Very sad that we have lost my father, Bill Waterhouse,” Robbie wrote on Twitter alongside a beautiful family photo.

“He left us peacefully with his family by his side. He was in great spirits till the end. He enjoyed a great day with all his great-grandchildren last Sunday.”

Very sad that we have lost my father, Bill Waterhouse. He left us peacefully with his family by his side. He was in great spirits till the end. He enjoyed a great day with all his great-grandchildren last Sunday. pic.twitter.com/2xLsPrvurQ

Bill sat front and centre in the gorgeous family snap with his children, grandchildren and great-grandchildren all smiling happily together.

Speaking to The Daily Telegraph on Friday, Robbie said his father had become quite frail over the past few months, to the point that family knew he didn’t have much more time left.

“I must say the doctor said as recently as [Friday] morning he had never had a patient fight more than my father – but we knew he was in trouble,” he said.

Bill’s daughter-in-law, and champion horse trainer Gai also had a few words to say, describing him as a kind, wonderful man, who adored his family. While Gai commended him for his bookmaking expertise, she said above all he was a great husband, father and grandfather.

“He was a role model to his children and grandchildren,” she told The Daily Telegraph.

Meanwhile, fans of the great bookie have sent their best wishes to the family during the difficult time

“What a great man … I was lucky enough to have a big win at a Boxing Day race at Randwick and he didn’t,” @REDV6 commented on Robbie’s post. “For the next five years he said ‘when can I get that money back’ … a great personality of the racetrack and larger than life.”

“Very said to hear that … his personality will live on forever in racing history battling the big punters,’ @DennisMenace54 said.

“Sorry to hear, he was a legend and what a celebrated life he had, thoughts with you and family,” @gb7004 wrote.

Bill studied law at the University of Sydney and worked as a barrister before entering the bookmaker world in the mid 1950s. He quickly made a name for himself in the industry and reportedly lost $1 million in just one day.

Bill only retired at the age of 88, with son Robbie and grandson Tom following in his lead and becoming bookmakers as well.

Do you have a message for Bill Waterhouse's family during this difficult time?