Where to find the most dazzling Christmas light trails across Australia 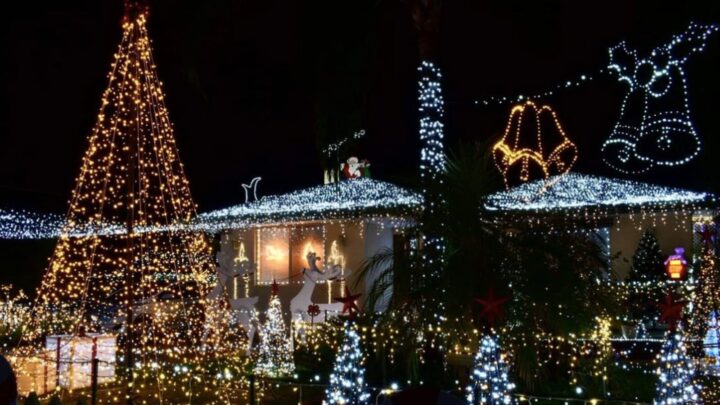 It’s beginning to look a lot like Christmas all across Australia and boy does the country love getting into the festive spirit! While hundreds of households put up their Christmas tree and string colourful LED lights, many homes don’t just stop there.

Many Christmas-loving Aussies go above and beyond to spread festive cheer, each one dressing up their yards and houses with flashing lights and over-the-top inflatables so stunning even the grouchiest Grinch would be impressed.

However, the key to a successful Christmas light drive-by is planning out the perfect route. So this year, Starts at 60 has made a list and checked it twice to help you find the best and brightest displays near you.

If you’re a fan of Christmas and disco then the Christmas lights display down at Farmhouse Avenue is your must-visit destination. Their mammoth lights display boasts over 50,000 LEDs, interactive snow play, and an abundance of colour. The funding for this year’s lights display will be donated to Lights for Kids and Sydney’s Children’s Hospital.

Over the past 15 years, Excelsior Avenue has gone bigger and better with its unmissable light display, and this year is no different. Unfortunately, this is the last year the street will be joining in on the lighting fun so the owners have spent months perfecting this year’s interactive display. The dazzling light display runs nightly until 10.30 and is scheduled to be on show through December 31. All proceeds will also be going to HeartKids and 22q Foundation Australia.

If you’re in the mood for big, head-turning displays then make your way to Waratah Street. Starting on December 28, Waratah Street brings out the big guns with a fun and dynamic display. From moving Christmas features to silly inflatables and twinkling lights, this house goes all out.  This street’s display is not only festive but is also for raising money for CareFlight.

Bondi may be a holiday hotspot known for being home to the iconic Bondi beach, but during the silly season, North Bondi’s pride and joy is Avoca Street and its remarkable Christmas lights displays. More than 50 houses join in on the affair, with many synchronising their lights to offer a truly unmissable Christmas spectacle.

Be transported into a Christmas wonderland at Walsely Crescent. For more than a decade, these guys have been wowing the public with their display. This year walk down twinkling archways to Santa’s chair for the perfect family photo-op. Stick around a while and you might be able to catch old Saint Nicolas himself arriving at the venue with the RFS.

The South Circuit is truly a magical experience unlike the rest. The interactive display is perfect for all ages and even has an ice cream van on the weekends. Just like Walseley Crescent, these guys have been running their display for over a decade and can guarantee to put you in a jolly mood.

If you’re up for some crazy Christmas lights South Street is the place to go. From light-sized LED characters to snow and bubble machines, South Street is not messing around with its display. The display runs every night through the month of December, with the bubble and smoke machines running every Friday-Sunday during the silly season.

643 Beans Road in Carseldine is one of Brisbane’s favourite light spots, and they’re holding the spot as number one again this Christmas. Paladin Place in Bald Hills is another Brisbane must-visit for those looking for an out-of-this-world synchronised light and music show.

If you’re for traffic-stopping driveways then head on over to Albany Creek and Bridgeman Downs. There’s a plethora of houses with bedazzled windows that are guaranteed to bring you sparks of festive joy. In Albany Creek make your way to Longreef Court and Kosta Place. In Aspley look for Stoneycroft Street for a synchronised light and music display. When you’re at Bridgeman Downs, check out Myall Place for an all-out display.

101 Kempsie Road in Mount Gravatt is a Christmas display so bright you’ll need your sunnies if you’re planning on driving by. But they aren’t the only ones going all out this year, the Logan suburbs have got fully into the Christmas spirit with 11 Lucy Drive in Edens Landing, 27 Laura Anne Drive in Windaroo, 23 Homestead Street in Marsden and 3 Dion Drive in Eagleby all putting out epic displays this year.

Houses in Sunnybank have also joined in on the Christmas lights display with some pretty dazzling displays found at 47 Caliope Street in Runcorn, 52 Orania Crescent, and 211 Benhiam Street in Calamvale. For those driving down to Coopers Plains, head on over to 10 Keeling Street and get blown away but this residence’s neon light show.

East Brisbane is showing off some impressive Christmas displays this year and over at Alexandra Hills’ Ashbury Court and Classic Court Christmas display fanatics can find an entire cul de sac of bright beaming lights. Meanwhile, over at Capalaba prepare to get mesmerised by the twinkling lights scattered around the area.

If you’re on the hunt for a kaleidoscope of colour then 1 Moncrieff Court in Mount Ommaney will soon become your favourite spot. While you’re driving out, make sure you check out Everard Street in Westlake and Kaputar Close in Riverhills for a row of festive lights.

A post shared by Christmas Lights in Melbourne (@christmaslightsinmelbourne)

Tucked away in the dainty streets of Kew is one of Melbourne’s long-standing, fully computerised light shows. With over 80,000 lights on display, get ready to bask in the glow of the Christmas lights as you either watch from the footpath or enjoy the display in the comforts of your car.

Known as one of Melbourne’s best Christmas light displays, Glencairn Drive features fun festive characters and scenes scattered across the whole house. To make this extra special, from 8.30 pm coffee trucks and ice cream vans park out front so you can enjoy some tasty treats as you watch the music and light show.

Head over to Pakenham and witness a light display so bright you’ll surely be able to see it from space! With over 50,000 lights, you’ll no doubt see Kristina Court’s glitzy lights from miles away. This walk-in display also features bubble, smoke, and show machines! All proceeds are also going to Camp Quality.

The family at Hansford Close absolutely adore Christmas and has been doing Christmas lights displays for over 20 years. Their decor keeps getting bigger and brighter each year, no doubt making everyone feel the festive spirit. Their massive display runs for the whole month of December through to January 7.

This extravagant display is a must-visit this silly season. From moving reindeer, a Ferris wheel, and snow, smoke and bubble machines, the residents at Molle Street spend over a month creating what is arguably Hobart’s best Christmas lights display. Visitors can also meet Santa outside the house and children who post their letters to the North Pole (aka 121 Molle Street) even get replies from Santa. Molle Street has been doing its display for 5 years now, raising funds for local charities.

Nothing says Christmas quite like stepping foot into a mini theme park and meeting Santa Clause himself! This Carramar home goes all out during the festive season. With snow machines, interactive characters and Santa hanging out inside his grotto, this display is picture-perfect in every way possible.

Another breathtaking display can be found at this Atwell home. Imagine walking through a sparkling walkway and entering an enchanted forest filled with recognisable Christmas characters and lights in sync with the music. Visiting Kennack Vista on the weekends closer to Christmas and you might be lucky enough to catch the snowfall.

Samson Court in Duncraise is home to some of the best and most creative displays in Perth. Look out for the home with the whopping 45,000 LED lights, and keep your eyes peeled for snowmen, reindeer and a cheeky elf or two. Here, the whole street joins in on the action as they once again raise money for Wheelchairs For Kids, adding more to the $120k they have already raised in the past years.

45,000 lights and a 5-metre-tall Santa and reindeer,  the homeowners of 8 Scurry Street take Christmas decor very seriously. They’ve been decorating their home with inflatables and bright lights for 15 years, and while their neighbours also join in on the light show, these guys take the Christmas fruit cake!

Since 2010, the suburb of Forde has become many locals’ go-to Christmas light area. Many of the homes don festive and tasteful displays, making the drive a totally worth-it experience and making you leave feeling extremely satisfied.

For about 15 years the residents at Bissenberger Crescent have been bringing the magic of Christmas to Canberra with their delightful display. Their lights blanket their lawn and features their very own handmade Christmas village. Their walk-in display truly feels like stepping foot into an alternate Christmas universe.

A massive Christmas display and handmade gifts and sweets up for purchase? What more could you ask for! From December 1 to 23, make your way to 17 Middleton Circuit in Gowrie for a magical Christmas experience you won’t want to miss out on.