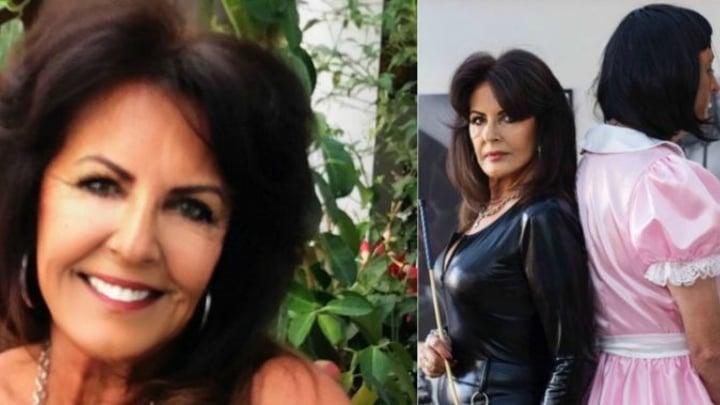 Sherry Lever is known as 'Mistress Sofia' to her clients. Source: Sherry Lever.

Many women suffer a severe knock to their confidence after a marriage breakdown, with some struggling with grief as they face an uncertain future on their own.

And it was no different for grandmother Sherry Lever, 67, who spent three months confined to her sofa and lost a staggering 22kg when her husband suddenly left her.

Revealing how it all started after her split, Sherry – who is known for her alter-ego Mistress Sofia – explained: “My daughter sat down one day and started to cry and I said, ‘What’s wrong’? She said, ‘I think you’re going to die’. That’s when I realised I had to pull myself together.

“Looking back now, I think it was more fear than grief. To be left when you’re 59 years old, and you think that your future’s mapped out, it was absolutely terrifying.”

She added: “I was watching the TV one night and came across a program on phone sex.”

While she’d never considered anything like it before, Sherry was drawn in by how happy the women on the show looked and eventually messaged one of them to sign up. Thanks to her past doing amateur dramatics, she was a natural and continued for the next four years.

While she has hundreds of clients, Sherry explained most of them have high powered jobs – with some including high court judges, surgeons, solicitors and even a few celebrities. Dropping their daily personas at her door, they dress up as anything from animals to French maids and some even choose to get locked up in a cage overnight, giving her complete control over them.

“The oldest is 84 and the youngest is actually 19…” she explained. “I’ve got quite a few that are married but I don’t feel guilty about that because I don’t do anything sexual with them. To be honest, some of them have had great downs and mental problems because they’ve had to subdue what they feel.”

She added: “They come to me, start hoovering and like to be told what a naughty girl they are, then they go home to their powerful jobs.”

Asked if she has any famous clients, she said: “I’ve had high profile people but I can’t name them.”

Describing the moment she invited her very first client over, Sherry said he was a “sissy” – essentially meaning he liked to dress up as a woman and get bossed around.

“He actually came down in some black lycra shorts and a little spiky collar,” she explained. “Then he started kissing my feet which I was really embarrassed about… Then he went to get changed again and came down in a baby doll outfit and asked if I could put lipstick on him. So I had everything thrown at me at once! The second day he came down in a maid’s outfit and I’m not kidding, my house has never looked so clean.”

She soon got into the swing of it and as she started collecting more equipment, Sherry converted her conservatory into a playroom.

Revealing the strangest request she’s ever had, she went on: “One guy wanted me to burn all the hair off him with matches… Occasionally I’d accidentally touch him with the match and he’d say, ‘That’s okay I like that, it’s the risk of it touching me’.”

Meanwhile, she added of another client: “One sits in a chair and I have to pretend to be a hairdresser. I tie him to the chair and then pretend to do his hair – but he’s bald!”

For example, some clients like to dress up as a baby, but she said: “If they wet their nappy then they get caned.”

In some instances, clients even want to sign their house over to the dom. While, Sherry refuses to take part in that, she insisted: “Fin doms are a necessity. They just need to be responsible.”

A two hour session with Sherry costs around £240 (AU$421) while an overnight stay – which mainly comprises of the client being locked up in the cage – is £300.

She said she’s more confident now than she ever was in her marriage, adding: “I was a shrinking violet, I looked a state and my husband was always having affairs and humiliating me.”

Now she hopes to continue her work for at least another 10 years to pay off her entire mortgage, insisting any negative judgement she gets for her career is like “water off a duck’s back”.

“I’ve had so many emails from women who are my age and have been left in a similar situation, interested in trying it out,” she said.

Visit Sherry’s official website here to find out more about her work and life transformation.

Would you ever consider a major life change like this?