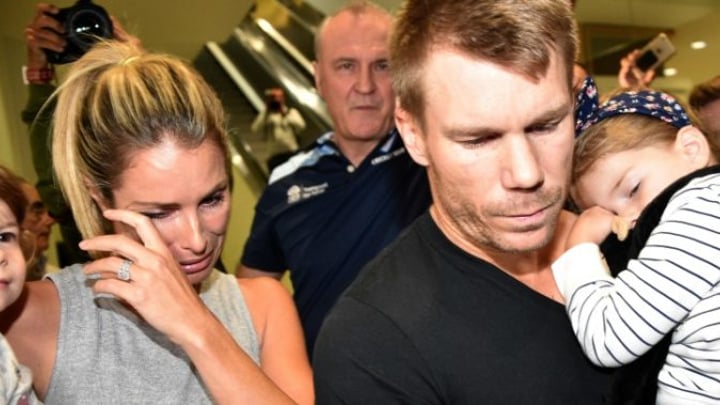 Aussie cricketer David Warner’s wife Candice has revealed she suffered a devastating miscarriage just a week after he was forced to give a tearful apology for his part in the ball tampering scandal.

Speaking in a moving and open chat with Australian Women’s Weekly, the 33-year-old said losing her unborn baby was “a heartbreaking end to a horror tour”.

Her husband and former Australian Cricket vice-captain was suspended from the sport for a year for his part in the cheating scandal. He broke down in tears on camera during an emotional press conference in March, while apologising directly to his wife, daughters Ivy Mae, three, and Indi Rae, two, his fans and his teammates.

Now, mum-of-two Candice has opened up on the moment she realised she was miscarrying, and told the magazine: “I was bleeding. We knew I was miscarrying. We held one another and cried.”

I sat down with Women’s Weekly and the talented Lizzie Wilson to reveal coming through our darkest days and how Dave and the girls will always come first. pic.twitter.com/FRs5pzSG6n

She added that the stress of the cricket scandal at the time had a huge impact on them all, and added: “The ordeal from the public humiliations to the ball tampering had taken its toll and, from that moment, we decided nothing will impact our lives like that again.”

While they had kept the third pregnancy secret, Candice revealed they were over the moon when they found out they were expecting after arriving in South Africa. They had been trying for their third baby since July last year.

However, shortly after returning home, they got the devastating news.

An investigation by Cricket Australia found former Captain Steve Smith, Warner and player Cameron Bancroft where the only players who knew of the ball tampering plan, and that Warner was the driving force behind it.

Warner himself gave a special mention to his wife during his press conference, saying: “Your love means more than anything to me. I know I would not be anything without you. I’m very sorry for putting you through this and I promise I will never put you through this again.”

He admitted at the time that he had resigned himself to never playing cricket again, before confirming he had accepted his punishment from Cricket Australia.

“Most important now is the wellbeing of my family,” he told reporters, while fighting back tears. “In the back of my mind, there’s a tiny ray of hope that I may one day play for my country again but I’m resigned to the fact that might never happen.”

Do you have a message for the couple?