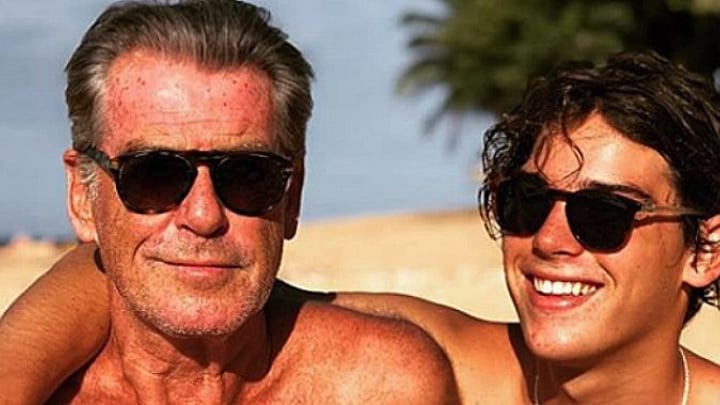 The saying goes ‘like father, like son’ and that’s certainly the case for Pierce Brosnan and his lookalike son Paris.

The James Bond star, 65, caused quite a stir on Monday after he uploaded a shirtless snap with his son, 17. The photo sparked a huge reaction from fans, with plenty noting just how similar the pair look!

The photo was taken by Pierce’s wife, Keeyly, who managed to snap the happy father and son duo in a happy moment on the beach.

Fans were quick to comment on the lookalike shot, with one writing: “The apple doesn’t fall far from the tree.”

Another commented: “Paris has your smile!” While a third wrote: “You two look like brothers.”

In fact, the striking resemblance can truly be seen in a snap of a young Pierce from drama The Long Good Friday (1980).

The similarities between the actor then and his son now are pretty striking, and while Pierce had longer hair at the time, the pair share very similar facial features.

Pierce and his wife Keely Shaye Smith share sons Dylan, 20, and Paris, and seem just as loved-up as ever, with each regularly sharing beautiful photos of each other on social media. The pair met on a beach in Mexico in 1994, but waited seven years before they tied the knot in a romantic ceremony at Ballintubber Abbey, in Ireland.

Pierce’s first wife Cassandra Harris, passed away from ovarian cancer in 1991, leaving him a single father to their son, Sean, and Cassandra’s two children from her previous marriage, whom Pierce adopted after their father died in 1986.

The doting father and husband regularly posts pics on social media and recently shared an adorable throwback photo of his wife with his 840,000 followers.

It comes after the couple, who have been married for 17 years, put on a stunning display as they attended the Chemotherapy Foundation’s Innovation Gala earlier this month.

While the former James Bond star looked dashing in navy-blue suit, it was his glamorous wife who stole the show in a stunning black lace dress. Keely, a journalist and former model, looked sensational in the semi-sheer dress, which she teamed with a simple pair of black heels.

Pierce was honoured at the event with the charity’s Humanitarian Award for his support for cancer research. The Chemotherapy Foundation is a not-for-profit organisation dedicated to the control, cure and prevention of cancer through innovative medical therapies.

Are you a fan of Pierce Brosnan? Can you see the resemblance?