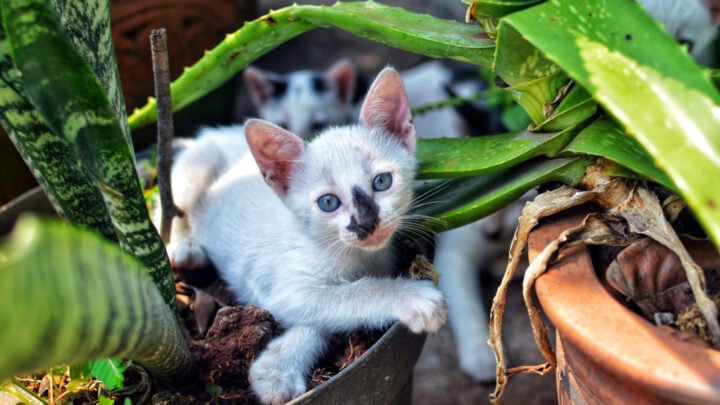 Are your house plants risking the safety of your furry family? Source: Getty

A trip to the nursery is a common activity for most of us, but are our resulting plant purchases putting our furry family members at risk? The answer, unfortunately, is that, yes, there’s a surprising number of plants (hundreds in fact) that can be poisonous to pets – many of which are commonly found in and around our homes. Our cats and dogs love to lick, bite and chew things, so it’s important to know that what you’re bringing into the home isn’t harmful, and to check the plants you already have.

We’ve put together a list of some of the most common house plants and flowers that can be harmful, but it’s far from an exhaustive list, so we recommend performing a quick Google search before bringing any new plants home.

Aloe vera
Aloe vera is toxic to both cats and dogs, and while it’s unlikely to kill them, it can lead to serious poisoning, with symptoms including tremors, vomiting and diarrhoea.

Azaleas/rhododendrons
There are thousands of varieties and it’s best to steer clear of all of them because these beauties pose a very high risk of serious poisoning to cats and dogs, which could lead to a host of severe symptoms, such as abnormal heart rate, hypotension, transient blindness and seizures, to name a few.

Daffodil
Bright, happy and highly toxic, daffodils are a danger to cats and dogs. Symptoms of poisoning may include drooling, vomiting, diarrhoea, an increase in heart rate, abdominal pain and abnormal breathing.

Hydrangeas
This beautiful, colourful garden shrub can be toxic to cats and dogs. While the reactions are only mild, symptoms can include lethargy, vomiting and diarrhoea.

Lillies
Common in bouquets, these stunning flowers can be deadly for cats. All parts of the plant are toxic and, if left untreated, cause acute renal failure within 12-36 hours. Lilies are only mildly toxic to dogs, but cats only need a to ingest a very small amount to be badly affected. Because of their effect on the kidneys, one of the symptoms is excessive thirst, as well as vomiting, diarrhoea, abdominal pain, decreased appetite and lethargy.

Poppies
Commonly a mark of honour for men and women who served and continue to serve, these can be toxic to cats and dogs. Symptoms of poisoning can include a change in behaviour, either sedation or excitability, a lack of appetite, and dilated or pinpoint pupils.

Sago palm
This common tropical plant is also incredibly toxic for cats and dogs. All parts of the plant spell danger for our furry friends, so it’s best avoided entirely. If you suspect your animal has been in contact with the plant, symptoms to look out for include drooling, lack of appetite, vomiting, diarrhoea, weakness, seizures, tremors, lethargy and abdominal pain.

Tulips
These pretty flowers are also pretty dangerous. Presenting a mild to high toxicity rate to cats and dogs, the bulbs are the most dangerous part of the plant. Symptoms of poisoning may include drooling, vomiting, diarrhoea, increased heart rate and difficulty or rapid breathing.

What to do
If you suspect your animal has come in contact with any of the above, or starts developing any of these type of symptoms, it’s best to get them to the nearest vet as soon as you can. It’s difficult to know what they’ve ingested or how much, and they can’t tell you exactly how they are feeling, so play it safe and get them some help sooner rather than later.

For an almost exhaustive list of the hundreds of plants that could harm your pets, the ASPCA has created separate lists for dogs, cats and even horses.

Do you have any of these plants at home with your animals?