Australia’s favourite dish and pizza topping: The controversial results are in 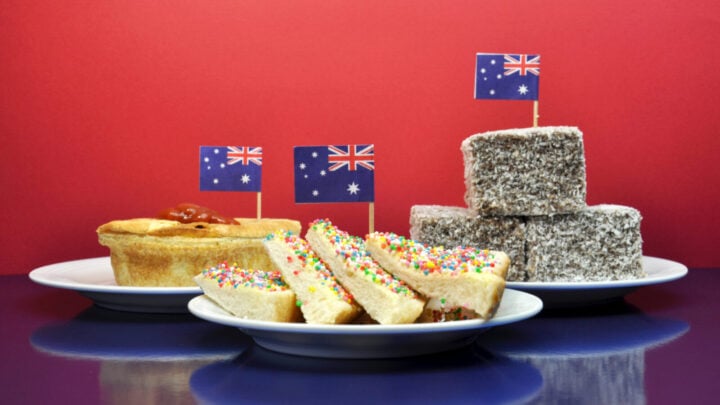 Australians have voted on their favourite dish - but only one of the items pictured made the cut. Source: Getty

Australians have been asked a very important question – a question that has long divided dinner tables across the nation – and the answers, for some, are highly controversial.

Chinaware company Royal Doulton Australia set out to discover which Australian meal was the most popular, and surveyed 1,000 Aussies in the process.

The company found the resounding winner pub favourite chicken parmigiana. The dish received a whopping 26.5 per cent of votes. Parmigiana, which originally hails from Italy, first popped up in Australia in 1980, food historian and author Jan O’Connell told ABC Hobart. While it’s served as eggplant parmigiana in its traditional form, the modern version of the ‘parmy’ is crumbed chicken topped with a red sauce and cheese and typically served with chips and salad.

The Anzac Biscuit took home second place, with 18.8 per cent of the votes. With a history going back to World War I, it’s claimed the recipe was invented by wives and woman’s groups sending the treats to soldiers fighting overseas, choosing ingredients they knew travelled well and would not spoil on long voyages.

Third place goes to another Australian favourite, however, its origin still sparks debate among Australians and New Zealanders. We’re talking, of course, about pavlova.

The dessert was named after the Russian ballerina Anna Pavlova, who visited both countries in the 1920s. However, according to The BBC, the Oxford Dictionary attributes the first-ever pavlova as appearing in New Zealand in 1927. The verdict is still officially out, but clearly, 17.2 per cent of people were happy someone invented it!

The lamington took home fourth place with 14.7 per cent of the votes. It first appeared in 1900 in Queensland and is even honoured with its own day — National Lamington Day on July 21. The cake was created by the chef of the state’s eighth governor, Lord Lamington, to feed unexpected visitors.

Closing out the top five was the BBQ staple, sausages or ‘snags’ which received 12.2 per cent of the votes.

In a separate study by Delicious magazine, Australia voted on its favourite pizza topping – and the results are somewhat controversial. According to the study, the top five pizza toppings in Australia are: mozzarella, salami/pepperoni, mushrooms, olives and pineapple.

While the results are fairly classic toppings, the survey found tastes between states varied widely –  with one even naming white chocolate as one of the best pizza toppings. So, how did your state vote?

Hawaiian-hating New South Welshmen steered well clear of sweet toppings, not even ranking pineapple in the top 10. Ham also didn’t show up in the top 10, with the more sophisticated taste buds of New South Wales choosing prosciutto instead. They also rated chilli and three seafood choices (smoked salmon, prawns and anchovies) among their 10 favourite toppings

Victorians were not a fan of anchovies or seafood in general, instead going for more meaty options like ham, salami/pepperoni and prosciutto, and bacon.

They also rated pineapple as their third-favourite topping and ham as the fourth – no other state ranked these two key elements of the Hawaiian pizza nearly as highly.

Those living up north love bacon, mozzarella, salami, olives and anchovies. This tropical state also ranked pineapple higher than any other, even Queensland.

Just like Victorians, Queenslanders favoured meat-lover pizzas, choosing salami/pepperoni, bacon, prawns and Italian sausage in their top 10. Queenslanders also voted their number one topping as olives – a topping that failed to secure a place in nearly any other state or territory.

Tasmanians showed some unusual tastes – rating smoked salmon second on their list of favourite toppings – way above any other state. They were also the only state to rate sweet pizza; with white chocolate coming in third place. Bizarrely, Tasmanians also named vegemite as one of their favourite pizza toppings, making pineapple seem almost normal.