‘Everyone was desperate to leave’: Worst-ever dinner parties revealed 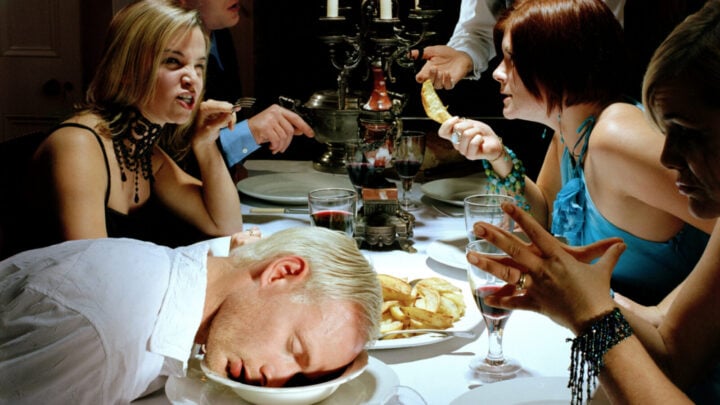 People have taken to the internet to share their worst ever dinner parties, and there are truely some shockers! Source: Getty

After accepting a dinner invitation to her boss’ house, a woman has taken to the internet to share tales of the terrible experience and prompt others to share their own hilarious and horrifying dinner party stories.

The woman explains exactly what went wrong on the forum Mumsnet, saying her boss was already drunk and barely able to stand when they arrived. The woman goes on to say her boss spent “ages” showing guests a lizard on the wall, before dropping on the floor a box of brownies that had been given to him as a gift by another guest.

The woman says that once they finally did sit down to eat, the boss was too drunk to carve the chicken and instead asked her if she could do it for him, before assuring her he’d make sure she passed her probation. The man proceeded to drink her wine by mistake and brag about baking the bread rolls, despite her seeing the packet in the kitchen. Dessert was finally served at 1am, and while “everyone was desperate to get out”, the host, seemingly oblivious to how badly the night had gone, invited them all to do it again.

While this woman’s awkward experience was bad enough, the responses that flooded in show just how many of us have attended bad dinner parties or hosted our own complete failures. From leaving hungry to giving guests food poisoning and un-catered-for food allergies and angry wives, this Mumsnet forum shows there are myriad ways to ruin a dinner party.

The post has almost 200 comments, with many sharing their personal failures, including one woman who accidentally served an animal that many of us wouldn’t ever dream of eating voluntarily. The woman, who goes by the internet avatar LadyB49, said she and her husband had just moved to a new area when they invited a few work colleagues around for dinner. The woman said the night initially went smoothly, with the guests chatting and getting along great.

“I was very young, about 25, and just married. It was [the] mid-1970s. My dh [darling husband] was an engineer and got a job on the continent and I went with him [after] renting out our home,” she wrote. “I went into the butcher on the way home from work and got six steaks. I went to cook the steaks. Well… no way were these steaks ever going to cook up tender. I did all I could and in the end had to serve them. So embarrassing. We chewed and chewed – amid my apologies. In the end, we just gave up.”

Soon after, however, the woman realised exactly why the steak had been so tough. “The next morning on my way to work, I noticed the horse’s head above the butcher’s shop. It was a horse butcher! In my innocence, I’d bought horse meat,” she wrote.

Being served horse might be grim, but at least the guests were fed, unlike one unlucky woman, who says she politely sat down and somehow was totally missed when the food was served. “Years ago, a group of us gathered at a friend of a friend’s for a meal,” she explained. “When it was served, we were all sat randomly in the living room [but] my food never appeared. I cannot fathom why I did not speak up, nor did anyone notice, so I went without.”

Another woman shared her experience, playing the mediator between an angry husband and wife, adding that the marriage ended in divorce. She said that for three consecutive Christmases, the couple had invited her to their festive celebration, writing, “Her and her husband hated each other. [A] friend was having an affair with the man in their annex, every plate would be put down heavy, alcohol measurements would get more generous (I’d drive, so was a spectator) and they’d ask each other questions via me. Sometimes I’d say nothing and just watch.”

She said the evening would be finished off with a lovely stroll. “We would then go off for a walk with the kids and dogs while my friend would cry and say she was going to leave but was waiting for his parents to die so he would be loaded for the divorce. She never worked and was an ‘artist’,” she wrote. “They are now separated and I’ve not seen them for over a year. I presume me as a distraction is no longer useful.”

While bad food and poor company are surefire ways to ruin a dinner party, there’s nothing quite like inviting an ex-partner to ensure a night of disaster. Apparently, one man didn’t think it was an issue.

“[The] best I’ve seen is BIL [brother in law] inviting his ex-flame and her husband to a dinner party, with SIL [sister in law] there,” one woman shared on the forum. “This woman was extremely successful, beautiful, spoke three languages etc. [She] was there with her husband (she cheated on with BIL while she was married; SIL didn’t know this).

“This woman was dressed really sexily – heels, belly on show, very glam. SIL, who is usually glam too, for some reason decided to dress down in leggings and a T-shirt. This woman was dancing salsa in the living room, drunk, flirting with BIL, looking amazing, big hair, etc. I have never seen someone as jealous as my SIL was that night. She was almost green. She could barely speak.”