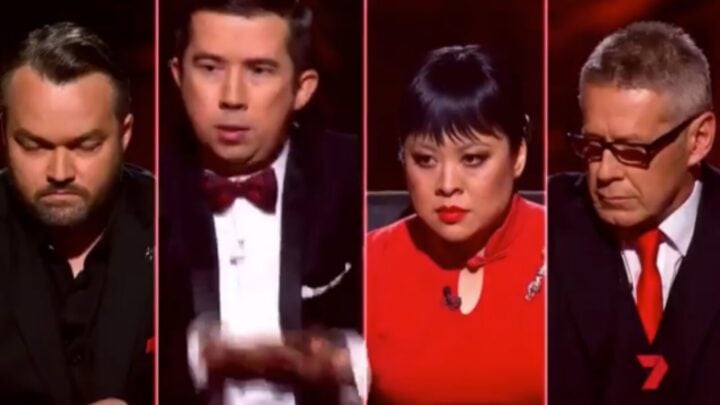 The Shark, The Supernerd, The Tiger Mum and Goliath are banding together for the new show. Source: Channel7/Twitter.

Earlier this year it was revealed that the popular UK quiz show Beat The Chasers was coming to Australia and chasers The Shark, The Supernerd, The Tiger Mum and Goliath were banding together to defeat the best of Australia’s esteemed quiz royalty.

Well, Seven has now unveiled the line-up of contestants who will go head to head with the chasers, and they include The Chase Australia winner, Who Wants to Be a Millionaire? champion, Sale of the Century world record winner and Temptation winner.

These quiz champions are taking on Australia's most formidable brainiacs… all at once! 💥

Beat The Chasers Coming this November to @channel7 pic.twitter.com/DaI6Mo2gmY

Seven announced the new show, which is based on the UK version of the same name, in August this year, revealing there’s over $500,000 up for grabs and will be hosted by none other than Andrew O’Keefe, who also hosts The Chase Australia, which has proven to be a huge success across the country. In fact, The Chase’s audience has grown by over 7 per cent year-on-year.

Speaking about the new show at the time, Angus Ross, Seven’s Network Programming Director, said: “The Chase has proven unbeatable at 5.00pm, so we can’t wait to supersize it with Beat The Chasers. The prize money is bigger than ever before in each round, and it builds to a thrilling, high-stakes finale.

“We’re excited to see some of the country’s best brains test themselves against a formidable line-up of chasers, with all the fun, tension and play-along we love — but dialled up to eleven.”

Meanwhile, David Mott, CEO of ITV Studios Australia added: “Beat The Chasers has proven itself as a dominant addition to The Chase family. This fast-paced quiz attracted a broad audience of quiz-lovers in the UK and we can’t wait to share it with Australian viewers. With the chasers forming the greatest quiz team on the planet, it remains to be seen — can anyone beat the chasers?”

Beat The Chasers is coming to Seven this November.