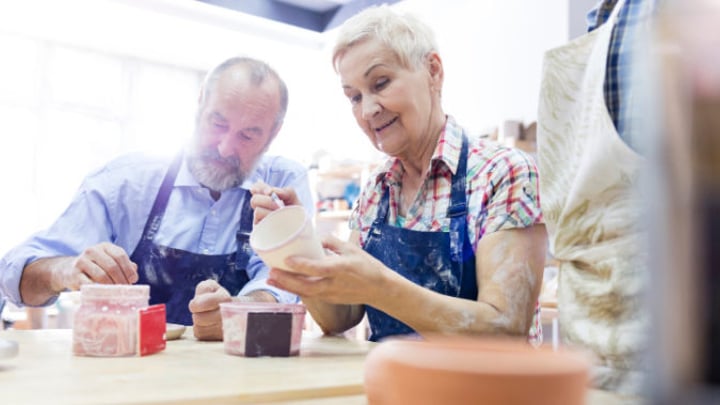 Having your cataracts treated means being able to go back to your favourite activities.

Your grandkids proudly showing off their latest works of art, your friends’ smiles, a new bloom in your garden, the view from your favourite beach lookout –  your eyes play such an important part in letting you enjoy the loveliest things in life.

And the older you get, the more you tend to appreciate being able to take in all those treasured little things; in fact, one in four Baby Boomers say they fear losing their sight more than any other health condition.

Yet more than half of older Australians aren’t well informed about cataracts, the common eye condition that can rob you of your ability to appreciate life’s small details, as well as of big, important life skills such as driving and living independently.

Perhaps more worryingly, older Aussies were the most likely of any age group to think that cataracts would eventually go away on their own if not treated.

Being aged 60 and above is the biggest risk factor when it comes to developing cataracts, and the symptoms aren’t always easy to identify – cataracts are rarely visible to the naked eye and don’t cause pain, redness or tears – which makes vital that 60-pluses have a good understanding of cataracts, their symptoms and the effective treatments available to ensure they don’t lose sight of the things they value most.

A cataract is a condition in which the lens of the eye, which is normally clear, becomes cloudy, and the cloudiness impairs vision by blocking light from passing through the lens to the retina. Cataracts can form in one or both eyes, and if in both eyes, the cataracts may vary in severity from one eye to the other.

The cloudiness occurs because the cells and proteins in the lens have degenerated over time, which is why ageing is the biggest risk factor for cataracts.

Having a family history of the condition, suffering an eye injury or disease (including glaucoma and myopia), having diabetes, using certain medications, over-exposure to sunlight and smoking cigarettes can also heighten the risk of developing cataracts. It’s thought that Australia’s sunny climate may make Aussies more susceptible to cataracts than other nationalities due to the UV exposure.

Dr Georgia Cleary, an ophthalmic surgeon who’s won international awards for her research into cataract surgery and lens design, says most people with cataracts have otherwise healthy eyes and won’t necessarily have had any vision issues prior to developing cataracts.

“Cataracts usually cause a gradual decline in vision, developing over a period of months or years, although occasionally they advance quickly,” she explains. “In some people, cataracts develop so slowly that they don’t notice the deterioration in their vision.”

How to know if you have cataracts

Not only does the slow development of cataracts mean some people come to accept their very gradually weakening eyesight as normal, but unless the condition is particularly severe, causing the lens to become completely white, it’s not possible to see cataracts in the eye.

“This is because they’re situated behind the iris, the coloured part of the eye, making them hard to see” Dr Cleary says.

The difficulty involved in self-identifying cataracts mean that it’s important to know their symptoms, so you can be diagnosed and receive treatment to restore your sight sooner rather than later.

Symptoms differ from person to person but common signs of cataracts include:

“’Near vision’, such as reading or looking at a mobile phone, or ‘distance vision’, such as driving or watching television, may be affected, or all distances can be affected in some cases,” Dr Cleary says. “Difficulty reading small print is a common complaint, even when wearing glasses.”

She adds that cataracts often have an impact on driving confidence, especially when it comes to night driving, because “it may be difficult to see road signs, and oncoming headlights or the setting sun may cause uncomfortable glare symptoms”.

If you have any of these symptoms, speaking to an eye-care professional is recommended.

Getting your cataracts treated

Your optometrist can identify and diagnose cataracts by doing a comprehensive eye examination. If the condition is at an early stage and not yet interfering with your eyesight, they may recommend ”watchful waiting”, to monitor for further progression, or they might advise you to update the prescription for your glasses or contact lenses.

For more advanced cataracts, the most common treatment is surgery.

You’ll be referred to an ophthalmologist, who’ll do what’s called a dilated eye exam by dilating your pupil with eye drops, then examining the back of your eye with a special microscope called a slit lamp.

Your ophthalmologist will also ask about your medical history, the medications you take and any eye problems you’ve had, because these factors can influence the outcome of your surgery. They’ll do some additional testing of your vision as well, to make sure they choose the right replacement lenses for your eyes.

Cataract surgery involves the cloudy lens being removed from your eye and replaced with an artificial lens implant called an intraocular lens (IOL).

“There’s a range of IOLs available and they have different features in terms of the range of vision that can be achieved after surgery,” Dr Cleary says. “IOL choice is very individualised and options are discussed prior to surgery.”

Most cataract surgeries are done under local anaesthesia but in an operating theatre in a hospital or day procedure unit rather than at the ophthalmologist’s consulting rooms or an outpatient unit.

You’ll be given medicine to ensure you feel calm and relaxed, as well as some local anaesthetic to your eye area to ensure it’s numb. The surgeon will then usually take about 15 minutes to make a tiny incision in your eye, remove the cataract and replace it with the IOL. The incision is far smaller than the cataract itself because the cloudy lens is broken up by ultrasound before removal and then effectively vacuumed out of the eye in tiny pieces.

The surgical procedure is quite standardised, Dr Cleary says, although the approach used by the surgeon is tailored to the patient’s individual needs. She also notes that some cataract cases are more complex, and may take longer in surgery, as well as having a higher risk of complications.

If you have cataracts in both eyes, the ophthalmologist will require you to return on different days for them to be treated, usually allowing one eye to heal completely before operating on the other, to cut the risk of a post-operative infection spreading from one eye to the other.

Your eyesight will gradually improve in the days after surgery, although full recovery from cataract surgery takes four to six weeks.

Busting the myths about cataracts

More than half of the over-55s surveyed about cataracts reported believing that cataracts could grow back after they’d been removed by surgery, but Dr Cleary says that once cataracts have been removed, there’s no possibility they will recur.

Nor can cataracts be treated by Lasik surgery, as is commonly thought, she says.

There are about 240,000 cataract surgeries done in Australia every year, and more than half of all Aussies who’ve had the surgery told the survey they felt much happier with their vision restored.

As Dr Cleary recommends, see your eye-care professional if you’re concerned you may have cataracts, because surgical treatment for the condition is effective, with very little down-time.

Have you had cataract surgery? Did it allow you to return to activities that your eyesight had previously forced you to give up?

Australians living with cataracts or presbyopia should speak to their doctor or ophthalmologist about how to manage the condition and restore a life full of vision.