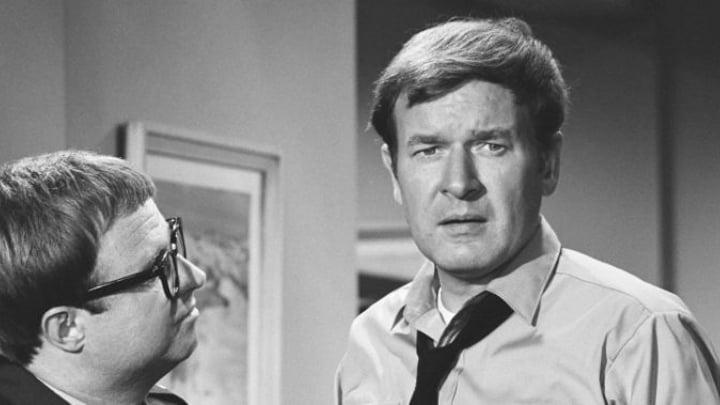 I Dream of Jeannie star Bill Daily has died of natural causes in Santa Fe, New Mexico at the age of 91.

The actor, who was best known for his role on the popular American sitcom passed away on Tuesday according to his publicist, Patterson Lundquist.

Posting on Facebook Lundquist wrote: “I can confirm that our favourite funny man Bill Daily passed on Tuesday, September 4. He was 91 years young.”

The publicist went on to explain how Daily had retired from all public life and recently moved from Albuquerque in New Mexico to Santa Fe to live with his son and family.

“Bill’s philosophy in life was that happiness was a decision you make. That was how he lived. Bill enjoyed every bit of his life to the fullest. There will not be a memorial service or funeral for family, friends and fans. Instead, Bill’s final wish is to throw a party. Remember the good times and be happy,” Lundquist said.

The publicist also shared his own personal message about Daily and the relationship they shared.

“From the moment we first spoke to the last time we spoke, Bill always spoke to me the same way, kindly, with wit, humor and compassion,” he explained.

“I could count on him for his jokes… even if I’d heard them for the 15th time. Bill would say ‘I’ve told you this before, I know, but hell there are no more funny jokes these days’. You couldn’t deny it, even if he was telling a joke for the 20th time, he told it like it was the first time. Some how he always made me laugh.

“Here’s to you Bill Daily, my friend, you happy, laughing, girl-chasing potty-mouth. You were everything I ever hoped you’d be long before I met you and you’ll always have a special place in my heart.”

Over the course of 1965 to 1970, Daily played the role of Roger Healey, the funny man and sidekick to Larry Hagman’s Air Force captain Anthony Nelson on I Dream of Jeannie. Here he starred alongside Barbara Eden who played the main character Jeannie. Daily then went on to star in The Bob Newhart Show for six seasons from 1972 to 1978.

Fellow actors have expressed their heartfelt condolences to their friend, including Eden who commended Daily for his caring personality.

“Our favourite zany astronaut, Bill Daily has passed. Billy was wonderful to work with,” she wrote on Twitter. “He was a funny, sweet man that kept us all on our toes. I’m so thankful to have known and worked with that rascal. Until we meet again Billy, xo – B.”

Our favorite zany astronaut, Bill Daily has passed. Billy was wonderful to work with. He was a funny, sweet man that kept us all on our toes. I'm so thankful to have known and worked with that rascal. Until we meet again Billy, xo -B #RIPBillDaily pic.twitter.com/OVZjaWB9CP

Do you remember watching I Dream of Jeannie? Were you a fan of Bill Daily?