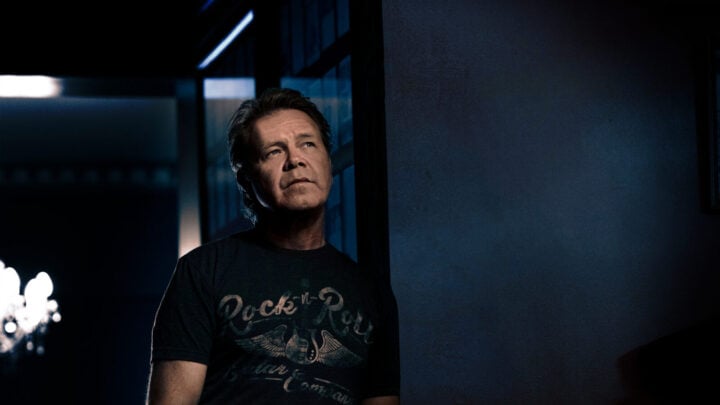 Battling the grief of losing his father, a struggling marriage, and the crippling effects of Covid-19 on the music industry, Troy Cassar-Daley turned to music as a way to cope. The result is his new, darker, and emotionally honest album, The World Today.

The Australian country music icon released the album on Friday, March 19, revealing to Starts at 60 it was written throughout 2019 and 2020, while he was grappling for control of his personal life.

No gigs, grief, and marital troubles

In 2019, Troy’s father, who had been living with depression and recovering from a stroke, took his own life. The year that followed brought Covid-19, a crippled music industry, and relationship troubles with Troy’s wife, broadcaster Laurel Edwards, all of which the singer said made for a more somber, emotional album.

“I wanted to make a different record because it’s been a really different few years for me,” he said. “To be able to dig deeper into some of these stories and make something probably a little bit rockier than I’m known for has been a really great release. I think that for me alone has been a great way to express myself.

“It was almost like a way out for me. What I haven’t done this time is try to hide the truth. It has no sugar coating on it. It’s a very honest record, I’d say this is the most honest, and the hardest one to write.”

The singer said his marital troubles were a result of his lack of work-life balance and while the album offered Troy a means of escape and way of expressing himself, he found himself in a dark place, hiding in his studio.

“After losing my dad I fell into a place where I didn’t really get any help,” he said. “When I was a kid, I used to hide in music quite a bit. My mum and dad broke up when I was quite young so I used to hide in songs, and I found myself doing that again.

“An old uncle of mine used to say ‘it’s not all beer and skittles’ and that saying is so true. Over the last couple of years, the family life and work-life balance that I’d always had shifted. It became a monumental struggle. The thing that suffered most out of all this was my marriage to Laurel and our kids having to witness their parent’s relationship slowly falling apart and I didn’t know how to fix it.

“I think there’s time in your life where you go through and have to reevaluate all that and I will try my hardest to make sure I don’t let that happen again.

“I’ve never been one to suffer from any sort of mental illness or anything like that but this was a dark turn for me and I think the music has reflected a bit of that, but I always want to make sure that there was some light at the end of the tunnel with the songs, so I was truly conscious of that on the way through.”

A proud Gumbaynggirr/Bundjalung man, the first single ‘Back On Country’ was a “homecoming” for the singer, sending him back to his hometown of Grafton in north-eastern New South Wales to film the music video for the song and spend time with his family.

“I fell back in love with being a musician again with this record,” he said. “The first film clip we made for the record was filmed exactly where I used to jump off the bridge as a little four- or five-year-old. You feel like you’re back there again. So it was really really a beautiful homecoming.”

“I didn’t intend to write anything like this, but it’s just what falls out of a bit of adversity you know – my dad, my marriage, and Covid all added up to me creating something that is really unique.”

The album deals with a range of issues that are close to Troy personally, including suicide and the overrepresentation of indigenous people in prisons. Troy spoke about the themes of indigenous incarceration and suicide in spoken-word form on Midnight Oil’s Makarrata Project album last year, reading a couple of lines from the Uluru Statement from the Heart.

“Proportionally, we are the most incarcerated people on the planet,” he said on the album. “We are not an innately criminal people. Our children are alienated from their families at unprecedented rates. This cannot be because we have no love for them. And our youth languish in detention in obscene numbers. They should be our hope for our future.”

“I’ve had several cousins incarcerated over the years,” he told Starts at 60. “I wanted to give them a way to get out, and I wanted people to understand a little bit about the overrepresentation of indigenous people in the jails. It’s a big conversation to have and it has started quite big conversations, which I’m happy about.”

Troy not only lost his dad to suicide but also an uncle – saying the songs ‘Parole’ and ‘Doin’ Time’ were written to give hope to those dealing with depression.

“With my uncle’s suicide, it was a long time ago, but you don’t realise how much it affects your whole family until you talk to uncles and aunties about him. It really does raise some really distinct things in conversation and it shows that intergenerational trauma is a real thing,” he said. “In the song, it gave him a way out and that’s always what I wanted to paint for him but unfortunately he didn’t make it. I think we need to give people those roads of light to look for.”

The raw, grief-filled album deals with some dark themes, ultimately, it’s about giving hope to those who need it. Troy says the album is best enjoyed on a long drive.

“I think what people will see, is that this is a real musical journey. It really is,” he said. “People that like taking long drives – this is your record.”

Are you a fan of Troy Cassar-Daley? Will you be buying his new album?