In Retirement Villages & Lifestyle Communities on Friday 21st May, 2021

The perfect space for a single: ‘Strathalan’s apartments are so huge, I downsized twice!’ 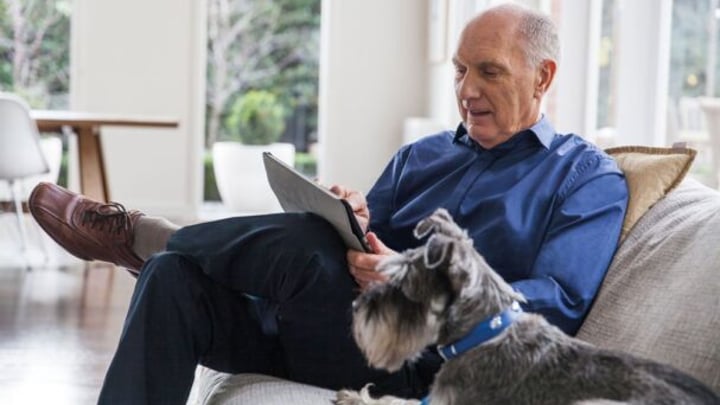 Whether you’re a couple or a single - or just have a faithful fur friend - Baptcare’s Strathalan village has something to appeal to every discerning retiree (and their best mate).

Like the idea of a low-maintenance, lock-up-and-leave lifestyle? Ready to enjoy all the bells and whistles of a luxurious retirement living community when you are at home? If this sounds like your ideal retirement, Strathalan is the place for you.

There’s a lot to love about Strathalan! Conveniently located in the suburb of Macleod in Melbourne’s north-east, and owned and operated by trusted retirement living and care provider, Baptcare, this established community has top-quality amenities and facilities, friendly, like-minded neighbours and well built, stylish homes. Plus, there’s the availability of support later in life if your needs change.

In fact, over-60s are so impressed with Strathalan that there are only 10 residences in the community’s new development still available for purchase.

John Attard had always liked the idea of living in an apartment and knew he wanted to be part of a community that could provide him with both enjoyment and security in retirement. So once he’d decided to make the move to retirement living,  John visited Strathalan, viewed one of its new build apartments, and according to him, the rest was history.

“Strathalan is just the complete package for me,” the 72-year-old says. “I’m a pretty social person so I’m looking forward to meeting new people, and the facilities are just fantastic. Choosing to move was possibly the easiest decision I’ve made.”

The appeal of Strathalan was so strong that John’s older brother Joe has decided to move there too!

“At 75, Joe’s a bit older than me so I think his family encouraged him to move now before he gets any older,” John explains. “It’ll be much easier for him by moving to Strathalan because I’ll be there and if he needs extra care in the future, it can be made available to him.”

Prospective residents should know, though, that the opportunity to join John and Joe in this thriving retirement living community is strictly limited. Although 32 stylish new villas are being built at Strathalan and can be bought off-plan, 70 per cent have already been snapped up since hitting the market in February. That means organising a viewing with sales manager Jan Wallace is recommended asap!

Surrounded by sprawling parklands and reserves, walking trails, bike paths and golf courses, Strathalan offers an outstanding retirement lifestyle in Melbourne’s north-east – with all the convenience of being connected to essential services. Cafés, restaurants, shops and entertainment are just a short stroll away from the community, and major shopping centres and hospitals are also nearby.

Inside the community itself, no detail has been spared in ensuring all elements – from the impressive facilities to the finishing touches on the apartments and villas – are top notch. In fact, John was so pleasantly surprised by the size and smart open plan layouts of Strathalan’s new apartments that, having originally secured a two-bedroom apartment, he decided to downsize to a one-bedder.

“Once I saw that the one-bedroom with study wasn’t much smaller than the two-bedroom, I switched my deposit over to that!” John says. “I figured it would be easier as it’ll just be me there on my own with my little dog Grace, and a second bedroom wouldn’t get used so I think downsizing was the right decision.”

It’s easy to see why John decided a one-bedroom plus study layout offered sufficient space, with floor-to-ceiling windows allowing plenty of natural light and a private outdoor space adding to the sense of airiness. Timber parquetry flooring, Caesarstone benchtops and integrated European appliances throughout add to the sleek, polished look of the apartment

Not that Strathalan residents need spend much time in their home, because there’s a wealth of shared spaces to enjoy. These include a newly opened community centre that houses a residents’ lounge and bar, hair salon, dining room, library, gym, terrace and winter garden. Not to mention a café serving delicious, nutritious meals six days per week (with the capability to deliver to your apartment).

Another reason residents don’t need to spend a lot of time at home (unless they want to stay in just to admire their gorgeous new property) is Strathalan’s packed social calendar.

At Strathalan, residents have a wide range of organised activities to choose from including yoga, dance classes, trivia nights and other social events – all of which are designed to bring the village together in a meaningful way.

“I’ll definitely make use of the library, lounge areas and the café,” John says. “I don’t cook much, so the idea of being able to have fresh, healthy meals delivered to my apartment is fantastic. I think they have Foxtel in the residents’ lounge too so I’m looking forward to watching plenty of sport.”

John adds that the icing on the Strathalan cake was the professionalism and care shown by the community’s Sales Team during his purchase process. “I’ve got nothing but good to report about the team,” John says. “Jan [Wallace], and Rachael Dwyer (Village Manager), they’ve both been very, very helpful. Always happy to answer any questions and they are very accommodating with any special requirements. I can’t fault them.”

Strathalan’s on-site residential aged care facility was a final, but important factor for John and older brother Joe. Aged care is the last thing on John’s mind right now, but he’s aware of how quickly circumstances can change and so of the importance of planning ahead.

“I really hope I don’t need it for a long while yet, but it is very comforting to know that when I do need extra care, or my brother does, we won’t have to move away from Strathalan,” John says. “It’s little added things like this that make the place even more impressive.”

Strathalan’s independent living villas and apartments come with the security of a 24-hour emergency call system, plus the option of having nutritious meals delivered and domestic services such as cleaning and laundry done. And the wellness hub, housed in the heritage Homestead, provides therapy rooms for healthcare practitioners who regularly visit the village to treat residents.

With his move to Strathalan fast approaching, John just can’t wait to move in.

“I’m looking forward to living somewhere new and having a bit more time to myself without having to worry about maintenance and things like that,” he says. “I like to travel, so knowing I can go away, and my premises is going to be safe and secure is really reassuring.

“There are other pets at the village too which I think is great,” he adds. “I’ve only got a little dog, but I’ve seen a lot of dogs around the same size as mine so living there will be good for her too.”

Bespoke service, beautiful residences and a vibrant community – as well as the peace of mind offered by on-site residential aged care. If all these things are important to you – as they are to John and Joe – visit Strathalan’s website and book an appointment to inspect the available properties today.

Live in your own private sanctuary in a single storey Stage 3 retirement villa at Baptcare Strathalan. Enjoy an abundance of space, indoors and out. This release is strictly limited,
and demand is high. Book your private appointment today.

Are you considering a move to retirement living? Let us know