‘The advertising claims that made me sit up and take notice’ 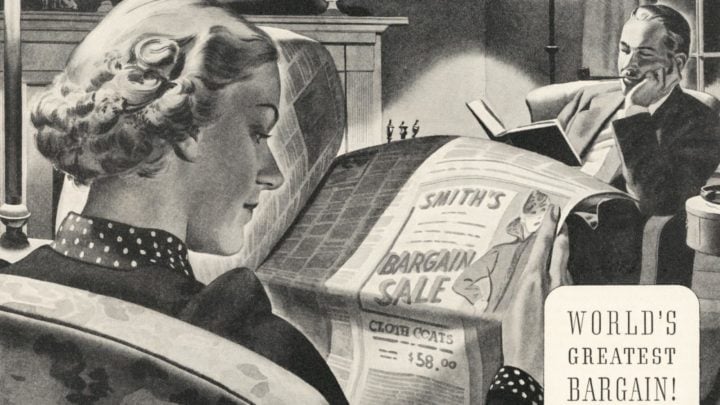 World's greatest bargain! A vintage illustration of a wife reading the sales advertisements in a newspaper in 1937. Source: GraphicaArtis/Getty Images

I was watching television recently when an advertisement came on extolling the virtues of one of the dishwashing machine powders. The voiceover proudly informed me the product, in its latest incarnation, was “cleaning dishes and rinsing them, better than ever before”. We don’t own a dishwasher (unless you want to call me that), and so my interest in the advertisement was strictly casual. Yet something clicked and my drifting, subconscious mind sprang into life. Surely, this company put out an ad just like this last year and they said their product left dishes absolutely spotlessly clean then, so how was it that they could now make them cleaner, when they were already perfect a year ago? Come to really consider it, they’ve been spouting these claims for years!

You can easily imagine I was somewhat dumbfounded when I realised this. How can something that is perfect be made even more perfect the next year? I started thinking about all those other advertising campaigns making similar claims with their product. I go back quite a long way, chronologically speaking, and I started remembering newspaper advertisements from soon after the war, which was of course long before television had been started. I remember seeing advertisements for laundry cleaning stuff like Persil, Rinso and Daz. All of them with copy almost exactly like the message I had just received on my television! They had all been most emphatic that their product annually produced sheets that were “whiter than white” and “crisper than new” to mention just a couple of the epithets that were thrown about.

But it’s not just the laundry and dishwashing products. Look at toothpaste – we’ve had products that apparently clean ‘even the yellowest teeth’ to a glorious shade of pure white, with a “new and improved” version appearing every year. Not only that, but these wonderful pastes, while producing teeth you could use as a torch at night so white they are, also get rid of tooth decay, make sensitive teeth less so and strengthen the enamel of your teeth to the extent that a pneumatic drill would be needed to get through to any necessary filling.

By now, things were whirling about at a merry rate inside my head and I had to sit back for a moment and slow down. Then mind went off at a complete tangent, something it is a bit inclined to do, and shouted to me as it swept past in one of its whirls – “Don’t forget petrol too, mate!” Of course, the petrol companies used to do much the same thing; they were always producing new fuel that guaranteed more miles to the gallon, decreased wear on the engine and cleaned just about everything, from your filler cap until the burnt fumes coming out of your exhaust even stopped the build-up of residue in that final pipe.

I guess we all just have to accept that companies who make things are going to tell us just what they think we want to hear, so that they can sell their product — never mind if it’s not quite the whole truth, it does, they hope at least make us feel we are dealing with something we can trust to do its best for us. Let’s hope they are right!

What advertising claims make you sit up and take notice? How has advertising influenced your purchasing decisions?