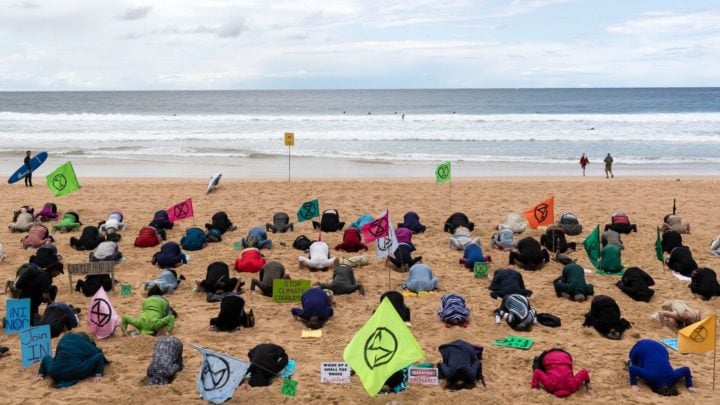 Steve says it's time to stop burying our heads in the sand. Source: Brook Mitchell/Getty Images

The world is going down the toilet. It’s a mess. Western democracy is under threat from right wing, corrupt, morally bankrupt self-destructive idiots, the world economy is falling off a cliff and we are close to the end of stage one of the climate crisis (the phase when perhaps we can still do something about it).

Relatively little is being done about these problems. Western populations are compounding the problems by voting for crazy people, leaders don’t know what to do about the economy and while they do know exactly what they can do to address climate change, they are ignoring the warning cracks of doom and instead irrelevantly bickering about whether or not mankind is responsible.

How have we allowed this to happen? What were we thinking? Clearly, we weren’t.

Politicians are in the pockets of major corporations and are moving further and further to the right, using populist slogans and attacking the messengers to divert us from and paper over their lack of leadership and looming catastrophes. It took decades to shake off Big Tobacco, but it’s proving much harder to dislodge Big Oil, Big Coal, Big Pharma, Big Food and Big Social Media, which are happily leading us and them into oblivion.

Big Oil and Big Coal are intent on being economically profitable right up until they tip the world into a cataclysmic global climate disaster likely to destroy the bulk of humanity and consign any survivors to a Stone Age existence. I’m sure that shareholders will be grateful and that living in a cave with a pile of money will be very comforting. Perhaps they can burn the bank notes for warmth.

Big Food and Big Pharma work hand in hand. Poor government dietary advice and processed junk foods are making us fat and sick in ever-increasing numbers and more and more drugs are being developed to treat the symptoms. It’s no surprise that a cure for cancer has not been found — if that is actually the case — as there could not be a more horrifying threat to profits for the pharmaceutical industry. Preventative health care would mean an even bigger threat to their business model.

Aiding and abetting these challenges to civilisation are Facebook, Google and Twitter, increasingly the only places where people get their news. Not just any news, though, news (and fake news) that is tailored to you. It no longer takes any effort to hear only what you want to hear, social media algorithms do it for you.

It’s not hard to see what has been going on. Baby Boomers are the largest and wealthiest cohort in the history of the world. Many of us have paid off our homes, have money in the bank, can travel and enjoy the finer things in life. Those of us less well off can receive a pension, housing, free health care and other public welfare right up there with the best the Western world can offer, and we will be taken care of by the state right up until we fall off the twig. We can enjoy a life of relative comfort in our later years even our recent ancestors could only dream of.

Our kids and grandkids have been pampered and showered with everything they could want. Grandkids, particularly, have known little real hardship other than having to wait a month or two for the latest mobile phone or putting up with the pain of living at home indefinitely.

Things are starting to bite for them now, however, as they find one university degree is no longer enough to secure them even a poor paying job, and if they do find work they face the horrifying prospect of having to move further from the city centre if they want to buy a home. The climate crisis might make all this irrelevant, so at least they have started waking up to that particular problem.

But we Baby Boomers are not very sympathetic. We did it tough compared to them, so they need to suck it up and work it out for themselves. Like we did.

Only this time they really, really need our help.

Our problem is one of human nature. We have acquired too much to lose. The world is at a crossroads, threatened by political, economic and climate instability. Everything is in danger of being lost. We want the clocks to stop and keep us exactly where we are and holding on to what we’ve got. We have stopped spending, started voting for right wing politicians who we hope will protect us, repel imagined foreign invaders, make the trains run on time and pretend that nothing is wrong. Then, with any luck, we can die before anything changes. Before we have to do anything.
No wonder the younger generations are frustrated.

They have grown up in a cotton wool world where nothing is allowed to hurt them, protected from life by helmets and knee guards, their opinions and arguments stifled in case they offend anyone and lacking any confidence in a bright future. We’ve always been there to tell them everything is going to be fine. Well, it’s not. Things are dire.

The pressing issues are clearly not dire enough to get us to act. We are too comfortable behind our keyboards, tut-tutting and signing online petitions and complaining that an Extinction Rebellion protest delayed our drive to the club. We are not desperate enough to join the protesters on the streets.

Perhaps when the rest of the world stops buying our natural resources and the economy enters a death spiral we might get up out of our chairs. When we age and sicken and health costs become unaffordable, forcing the government to cut pensions, crank up means testing and make us sell our houses to fund our retirement and medical bills, we might join the marchers. Or when the last of Australia’s topsoil is blown into the Pacific and our remaining farmers and other food producers are forced out of business, the dollar collapses and we must rely on excessively expensive imported produce.

Will that be enough to get us moving? Not dire enough? What about when Trump declares war on China and our sycophantic government starts sending our kids and grandkids off to fight and die? Getting closer to writing those placards?

But that’s enough negativity. I’m off to join Extinction Rebellion. Before it’s too late.

What do you think? Do you agree with this writer?