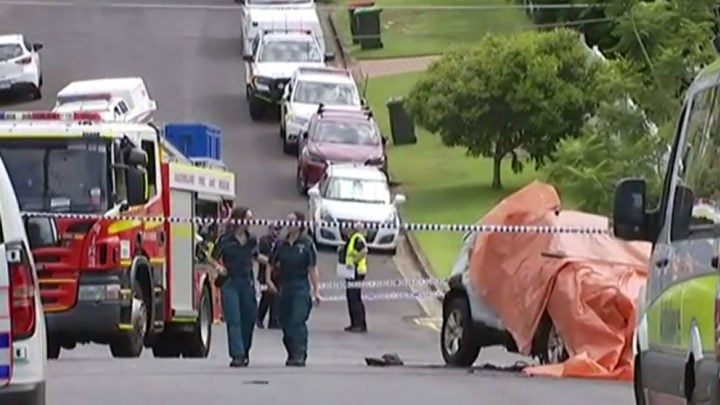 An adult and two children were inside the car when it caught fire on Wednesday morning. Source: ABC News.

Police have confirmed that four people, including three children under the age of 10, have died following a tragic incident in Brisbane this morning after a car caught fire just before 8.30am.

It is believed that three children and two adults – one male and one female – were inside the vehicle when the blaze was sparked, however the circumstances have still not been confirmed, with the investigation said to be at a very early stage.

Minister for Police and Corrective Services Mark Ryan confirmed the deaths this morning, however Queensland Police have since confirmed that four people in fact perished in the fire, including an adult male who was known to the children.

An adult female was also rushed to hopsital in critical condition, having suffered severe burns. While police would not confirm the names, ages or relationships of those involved, the woman was also known to the children and the deceased adult male.

Detective Inspector Mark Thompson delivered a press conference at the scene. He said: “At approximately 8.30 this morning emergency services were called in relation to a vehicle that was on fire.

“On arrival police and emergency services have identified five people that were involved in the fire. I can confirm we have three deceased children inside the vehicle under the age of 10, another deceased male who was known to the children.”

He added: “(One of the) complications that we have … is to positively identify the victims.”

A spokesperson for Queensland Ambulance Service also addressed the media at the scene, he said: “From an ambulance perspective we did all we could, but it was confronting. The first crew were confronted with a car fire … the first couple of crews, they were confronted with some deceased people. They quickly moved onto the people who needed treatment.

“We transported two people away from the scene with burns. One gentleman had some facial burning, he wasn’t related to the scene … as far as I’m aware somebody did step in to try and help. He was treated for some minor burns, they’re not life threatening.”

Minister Ryan issued a statement this morning which read: “I have been informed by police that three people have died, including children, in a horrific incident at Camp Hill this morning. All emergency services are on scene. The situation is at a very early stage and I am informed police are investigating all of the circumstances surrounding this tragic set of events.”

He added: “My thoughts are with all those affected by this terrible tragedy.”

Queensland Fire and Emergency Services were also called to the scene this morning, with five crews initially on site. However a spokesperson confirmed to Starts at 60 at around 10am that those crews had since left, while one member of staff from fire investigations unit remained on scene.

Raven Street in Camp Hill has been closed with a crime scene established in the street.