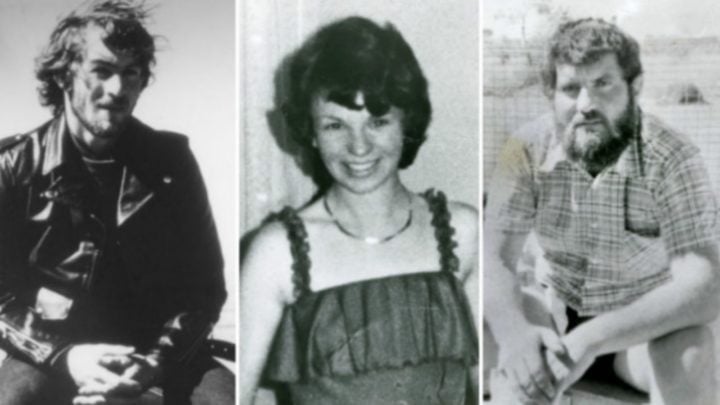 Police have arrested a man in the relation of the murders of Gordon Twaddle, Karen Edwards and Tim Thomson. Source: Queensland Police

The chilling triple homicide case of Karen Edwards, Tim Thomson and Gordon Twaddle was one of the worst in Australian history and 40 years on, police have made an arrest.

On Friday, Queensland Police confirmed detectives from the Homicide Cold Case Investigation Team charged a 63-year-old Goulburn man with three counts of murder following the deaths of three people in Mt Isa in 1978.

The three young friends – aged 23, 21 and 31 – were murdered when they were holidaying with their dog Tristie in Mount Isa in 1978. The three were found with gunshot wounds in bushland at Spear Creek, 12km north of Mount Isa, in October of that year and for four decades, the case had not been solved.

The arrest comes after Queensland Police launched a fresh appeal last month to find out what happened to Edwards, Thomson and Twaddle.

“Despite 40 years passing, we remain committed to solving this case, bringing those responsible to justice and ultimately providing closure to the victims’ families,” Detective Senior Sergeant Tara Kentwell said in a statement at the time. “We have reviewed thousands of pieces of information provided to police over the years, however, today we are launching a fresh appeal to encourage new witnesses and those who have already spoken to police to make contact with us.”

The three friends were last seen alive leaving the Moondarra Caravan Park in Mount Isa in a brown and white Toyota Landcruiser long wheel drive with a man on the morning of October 5 in 1978. A $250,000 reward was offered for information which led to the apprehension and conviction of the person or persons responsible for their murders.

As part of their appeal, Queensland Police released a timeline of events to hopefully trigger the memory of people who may know what happened.

On Monday October 2, 1978, Edwards, Thomson and Twaddle embarked on motorcycle trek from Alice Springs with Edwards and Thomson travelling with their dog on a distinctive red 1977 BMW 100S with a homemade side car carrying a Doberman. Meanwhile, Twaddle was riding a blue 1977 Suzuki GS750 with Victorian registration. The friends travelled to Aileron and camped at Ti Tree in the Northern Territory overnight.

The next day, on October 3, the trio stopped at Wauchope, Devils Marbles and The Three Ways. They also met a male described as a “motorcycle enthusiast” at Frewena and camped with him overnight at Barry Caves.

On October 4, Edwards, Thomson and Twaddle travelled with the man to Mt Isa, but the man failed to check into the Moondarra Caravan Park. Later that night, a man in a brown and white Toyota Landcruiser joined the friends.

On October 5, the last time the trio were seen alive, they left the caravan park with the man. Their motorcycles and dog were left behind. The man returned alone later in the day in search of the dog. The next day, all property except for the sidecar had been removed from the campsite. The dog was later discovered at Mount Isa Dump.

The bodies of Edwards, Thomson and Twaddle were discovered in bushland at Spear Creek later that month, while a 23-year-old man was arrested a month later when he was found with the red BMW motorcycle.

Meanwhile, Twaddle’s brother John previously released a statement through Queensland Police, explaining finding the person responsible for the murder of his sibling would put his mind at ease.

“This horrible event has played on my mind for 40 years and I feel for the families of these three friends who were cold bloodily murdered,” he said last month. “I feel that a result and conviction of the person (persons) responsible for these murders would bring some peace of mind and form some closure but it will never take away the pain of knowing how their lives ended far too soon in such a horrible way.”

Thompson’s brother David added: “My parents were shattered by the murders and I still feel a numbness that I don’t think will ever disappear.”
Police are expected to release more information about the arrest on Friday afternoon.