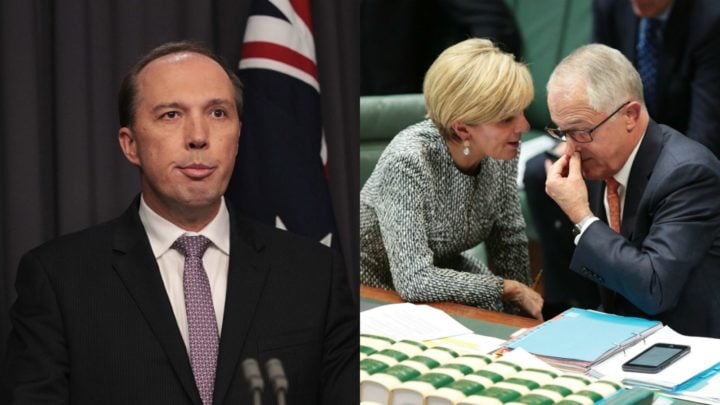 Peter Dutton has reignited his fight with Malcolm Turnbull by sensationally claiming in a no-holds-barred TV interview that he offered to dump Julie Bishop and make him deputy Liberal leader, after narrowly surviving the first leadership challenge.

In a clip from Sky News‘ new two-part political documentary Bad Blood/New Blood, which is set to air on Tuesday night, Dutton also went on to claim he’d have been more successful as prime minister than new PM Scott Morrison.

“Malcolm came up to me after that partyroom meeting and said, ‘I want you to stay on as Home Affairs Minister’, and I said, ‘Malcolm, that position is untenable and I can’t accept that’,” Dutton told Sky News.

“It’s all pretty high-stakes discussions and a desire to see the best possible outcome, so in my mind an easy transition is always the best but… he [Turnbull] offered me the deputy leader position. I said to him, given what had just taken place, that wasn’t credible and it wasn’t his to gift either.”

.@mattcunningham has a sneak peek of the Sky News special Bad Blood/New Blood, about the leadership spill which saw @TurnbullMalcolm ousted and replaced by @ScottMorrisonMP

Turnbull’s office has since slammed the claim as “nonsense”, according to The Australian, insisting he would never have attempted to replace Bishop while she held the position – nor was he in any position to make such an offer.

Turnbull’s supporters also spoke to the show, but declined to be named, and instead claimed it was Finance Minister ­Mathias Cormann who suggested Dutton take the job. However Cormann also denied these claims.

It comes after Dutton previously targeted former prime minister Turnbull in a brutal slamming of his political movements and time in parliament.

Speaking exclusively to The Sunday Mail at the time, the Home Affairs Minister blamed the ousted leader for the Liberal Party’s downfall, claiming Turnbull “doesn’t have a political bone in his body”.

Dutton didn’t hold back with his criticism of his former colleague at the time, labelling him indecisive and attacking his communication skills.

“Malcolm is charming and affable but he doesn’t have a political bone in his body and it’s not a criticism, but without political judgement you can’t survive in politics and he didn’t,” he told the publication.

“He didn’t have John Howard’s touch or judgement nor his ability to convey a message. We went from three-word slogans under Tony (Abbott) to 3,000 under Malcolm and our achievements weren’t effectively communicated as a result.”

Dutton went on to say that the party was “paralysed” under Turnbull’s control and that although he worked his way to the top position he had no plan on what to do once he was prime minister.

What do you think of Peter Dutton’s latest comments? Would you have supported him becoming Liberal leader or deputy leader?