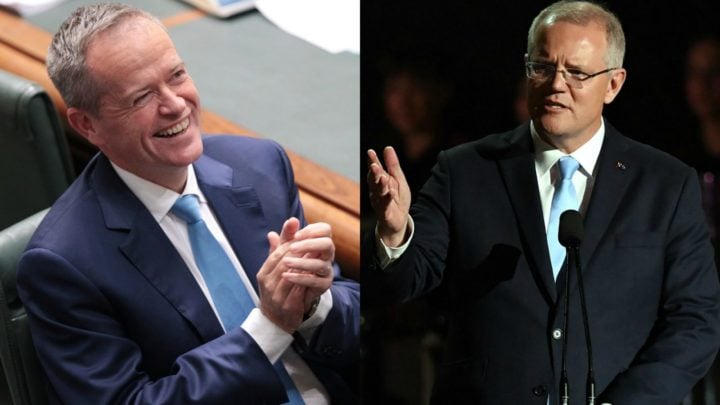 The figures also highlighted cost of living as the issue that matters most to the public in the run-up to the election. Source: Getty.

With just days to go before voters head to polling stations across the country, new analysis has revealed that an overwhelming majority of Australians do not believe the promises made by politicians in the lead-up to the vote.

A study of more than 2,500 people over the age of 18 revealed that, with just four days to go before election day, 79.9 per cent of people do not believe that politicians will make good on the promises they have made throughout the election campaign.

From tax cuts to housing schemes, and dental care to the pension, the likes of Scott Morrison, Bill Shorten, Clive Palmer and Pauline Hanson have pledged to improve the lives of Australians in all manner of ways in recent weeks as they battle it out for the keys to The Lodge. But, the study carried out by the Media Precinct has now shone a light on the public’s level of trust in elected officials.

Glenda Wynyard, Managing Director of the Media Precinct, said the results show that Australians aren’t fully engaged in the political process, despite the amount of campaign advertising and media coverage of key issues.

“We talk to average Australian consumers all the time and what they tell us here is they don’t have confidence in what they’re being promised and are concerned about the cost of living,” Wynyard said.

She added: “Some of the election promises won’t kick in until 2024 and there’s almost a complete lack of trust in those commitments being honoured. Around 4 out of 5 people don’t believe these promises will be delivered. This is one of the reasons why we have started to see a significant shift towards support for independent candidates and minor parties.”

Those surveyed were also asked to reveal which party they would vote for if the election were taking place that day, with Bill Shorten’s Labor party bagging 41.8 per cent of the vote, followed by the Coalition with 25.9 per cent.

Read more: Move over ScoMo: Australia’s ‘most trusted’ pollie revealed ahead of election

Earlier this month, a separate poll revealed that Australia’s most trusted politician is actually New Zealand Prime Minister Jacinda Ardern who scored a total of 77 out of 100, emerging as the most dependable elected representative, with respondents also marking her the highest when it comes to ‘integrity’.

A total of 1,400 Australians took part in the study conducted by research company Millward Brown and were asked to give 12 politicians – including the leaders of the LNP, Labor, One Nation, Greens and the United Australia Party – a score out of 100.

The scores were given in accordance with each politician’s performance in six areas; relevance, integrity, shared values, commitment, affinity and follow through.

Ardern was followed in the rankings by Labor’s Senate Leader Penny Wong with 53, retired Liberal MP Julie Bishop with 52 and Labor deputy leader Tanya Plibersek, who scored 50. Labor’s Anthony Albanese was the highest scoring male pollie, with a total of 46, followed by Greens’ leader Richard Di Natale with 45.

Current Prime Minister Scott Morrison, who replaced Malcolm Turnbull as leader of the Coalition in August last year, scored just 43 overall, while Shorten bagged a total of 42. However Queensland Senator Hanson pipped them both to the post with 44.

Do you trust politicians? Are you surprised by the lack of faith in election promises?