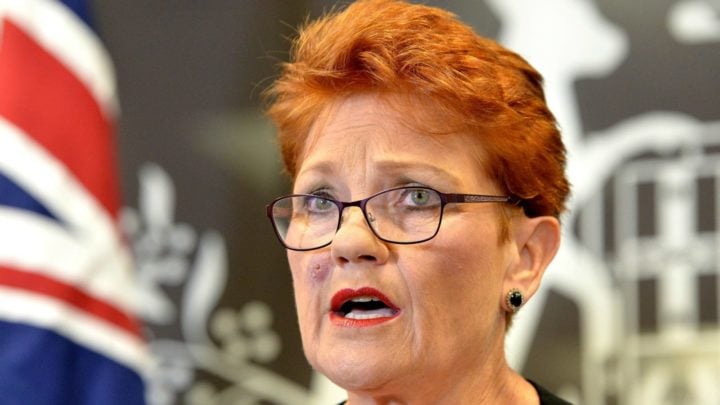 The One Nation leader has hit out at climate change protestors in a fiery rant. Source: Getty

Pauline Hanson has hit out at climate change protestors in a fiery rant on Sky New Australia, saying the “moron” protestors have “no respect for anyone else”.

The One Nation leader’s comments come after anti-Adani protestors caused traffic chaos on the streets of Brisbane earlier this week, after two people glued themselves to a busy road in the CBD.

“Absolute bunch of morons,” she said. “I’d actually lock them up, I think it’s ridiculous.”

Hanson also said the magistrates aren’t “tough enough” on these protestors, adding: “Like the vegans only getting a $1 fine, it is ridiculous.

“They look like the unemployed, unemployable, unwashed university students,” she added.

“[They’re] probably on welfare payment, they have no respect for anyone else, they’re holding up the cars… I can’t stand them.

.@PaulineHansonOz on protest causing commuter chaos in Brisbane: Absolute bunch of morons and I’d actually lock them up… The magistrates aren’t tough enough on these protestors, like the vegans…

However, many commentators have since slammed the senator on social media, with one writing: “Hey Pauline. Guess what. I have a job and I formed a part of a protest march with @XRebellionAus recently. I have a full time job, two kids, a mortgage. Oh, and I like to wash. I also have a degree so I don’t qualify as a moron.”

Another added: “I’m no fan of the vegans either, but Pauline Hanson is the most moronic politician in Parliament.”

A third wrote: “This chick actually can’t string a single sentence together. And racist PHON supporters still listen to this idiot?”

Others, however, agreed with the senator, with one adding: “Well said Pauline – they’re all a waste of space..time for Government to cut their welfare payments.”

Another wrote: “It’s not protesting when it impacts other people … it’s harassment. We’re told wolf whistling is unacceptable harassment but these fascists continue get away with this stuff.”

Have you been following this story? What are your thoughts? Do you agree with Pauline Hanson?