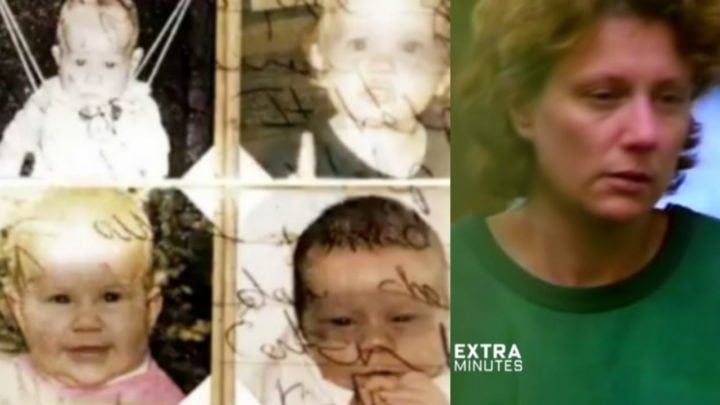 Kathleen Folbigg reportedly claimed during an inquiry in court that supernatural powers are to blame for the death of three of her kids. Source: ABC/Australian Story and YouTube/ 60 Minutes Australia

Notorious serial killer Kathleen Folbigg has claimed “supernatural powers” took the lives of three of her children who were found dead in the decade from 1989.

Speaking in NSW Coroners Court on Tuesday as part of an inquiry into the case, the convicted baby killer said there were things beyond her control which led to the infants’ deaths, the ABC reports.

Folbigg – who has remained behind bars since 2003 after being convicted of murdering three of her children and the manslaughter of another – was questioned over an alleged diary entry written following the birth of baby Laura, in which she allegedly wrote that her fourth child had “saved her life by being different”.

On Tuesday Folbigg was reportedly asked by retired judge and head of the inquiry Reginald Blanch what the entry meant to which she replied: “I had a belief that fate, karma, God, um, a spiritual thing [that] there was another reason as to why all this was happening.

“That there were other things going on beyond my control.”

This prompted Blanch to question Folbigg on whether she believed a supernatural power had played a part in the death of her children Patrick, Sarah and Caleb. Folbigg reportedly claimed that is her belief.

Her appearance in court this week marked the first time she has been seen by the public since 2003 when she was locked up over the deaths of her four young children.

The kids, aged between just 19 days and 19 months, were found dead in the decade from 1989, however Folbigg has always maintained her innocence and has suggested that her children all died of natural causes.

The mother, who has previously been dubbed “Australia’s most hated woman”, appeared at the court in Sydney looking downcast, as the inquiry commenced on Monday.

Her once bold red locks have since turned grey, while the lines around Folbigg’s eyes were evident after more than a decade in prison.

Nine News reported that the 51-year-old broke down in court as she stood in the witness box to address a series of concerning diary entries that she penned about her children, which formed a crucial part of the prosecution argument.

In one entry she described herself as “the worst mother on this earth”, while she said she was “short-tempered and cruel” in another. A further message said one of her daughters left “with a bit of help”, although Folbigg denies it was a confession of murder.

Kathleen #Folbigg breaks down as she tells the inquiry one diary entry was her expressing a fear of ”not finding my children alive.” @9NewsSyd pic.twitter.com/jObKyswjU9

However, it was the words she wrote in 1997, before the birth of her daughter Laura, that she reportedly struggled to discuss during the court hearing.

She is alleged to have said in a diary entry that she was scared of being alone with her child and that the kids “pushed her buttons” causing her to “snap her cog”.

When questioned by Maxwell, Folbigg claimed the phrase had nothing to do with harming her children and it could have been an expression of “slight frustration”, Nine News reports. According to the ABC, the mother said the diary entries were simply a way to “vent” her frustration.