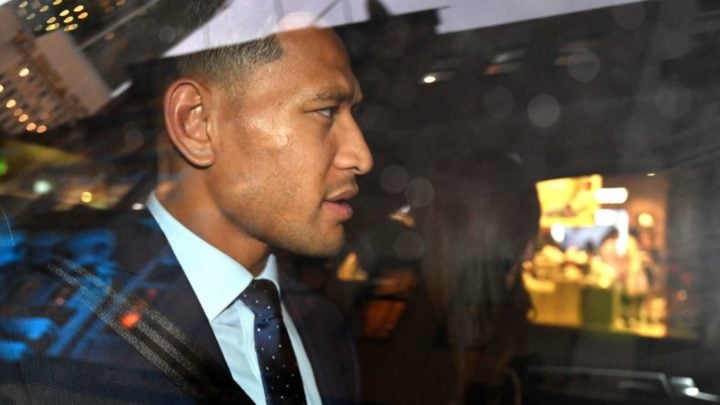 Israel Folau has launched an appeal against Rugby Australia and NSW Rugby after he was fired over homophobic comments made on social media. Source: Getty

Israel Folau has officially launched an appeal against Rugby Australia and NSW Rugby after being sacked over a number of anti-gay comments he posted on social media.

The rugby star said goodbye to his time in the competitive sport last month when his four year contract was terminated, after a decision was handed down by an independent three-member panel.

Now weeks later the 30-year-old’s legal team have confirmed applications have been filed with the Fair Work Commission with Folau claiming he was “unlawfully fired” because of his religious beliefs.

In a statement shared on Thursday the Rugby player said he felt his treatment by Rugby Australia and the Waratahs had left him with no choice but to stand up for his beliefs and the rights of all Australians.

“I will forever be grateful and proud to have played the sport I love for our nation,” Folau explained. “Ours is an amazing country built on important principles, including freedom of religion. A nation made up of so many different faiths and cultural backgrounds will never be truly rich unless this freedom applied to all of us.”

Folau went on to discuss the messages of support from Aussies after he found himself in hot water over an image shared on Instagram which said that sinners including “drunks, homosexuals, adulterers, liars, fornicators, thieves, atheists, idolators” would be going to hell.

Those that are living in Sin will end up in Hell unless you repent. Jesus Christ loves you and is giving you time to turn away from your sin and come to him. _______________ Now the works of the flesh are manifest, which are these , adultery, fornication, uncleanness, lasciviousness, idolatry, witchcraft, hatred, variance, emulations, wrath, strife, seditions, heresies, envyings, murders, drunkenness, revelings, and such like: of the which I tell you before, as I have also told you in time past, that they which do such things shall not inherit the kingdom of God.
Galatians 5:19‭-‬21 KJV _______________ Then Peter said unto them, Repent, and be baptized every one of you in the name of Jesus Christ for the remission of sins, and ye shall receive the gift of the Holy Ghost.
Acts 2:38 KJV _______________ And the times of this ignorance God winked at; but now commandeth all men every where to repent:
Acts 17:30 KJV _______________

He went on to say that he believes everyone has the right to speak their mind and follow their religion freely, adding: “The messages of support we have received over these difficult few weeks have made me realise there are many Australians who feel their fundamental rights are being steadily eroded.

“No Australian of any faith should be fired for practicing their religion.”

According to the statement, Folau will be seeking “substantial remedies” in relation to the termination which prevented him from playing at the “peak of his career” in the lead up to the Rugby World Cup.

The Sydney Morning Herald reports he will seek damages including $5 million in lost salary in addition to other penalties relating to lost opportunities.

“The termination has cost Mr Folau the best years of his rugby career, participation at the Rugby World Cup, the chance to become the greatest Wallaby try-scorer (a decades-old record he was likely to break), and the associated exposure and opportunities,” the publication reports Folau’s application stated.

“As well as around $5 million in lost salary, Mr Folau will claim in respect of the loss of these opportunities (renewal of contract, sponsorships, etc).”

However, despite the recent termination of Folau’s contract, a source has reportedly told 2GB host Ben Fordham there is a chance the rugby player could be welcomed back to the team if he deletes the controversial social media post.

The host claimed on his 2GB show on Thursday that, although NRL Commission Chairman Peter Beattie has said Folau is not welcome back, there are others who would like to see him return to the game.

“I can report exclusively that Peter Beattie has jumped the gun and his position is not shared by everyone else. The door is open to a possible return to the NRL for Israel Folau,” Fordham explained.

“The idea that Israel Folau has been blacklisted or banned is wrong, there are clubs that want him and the NRL has not made a final decision on this issue.”

Do you think Israel Folau should be allowed to return to the game? Do you think it was right of Rugby Australia to sack him for his comments?