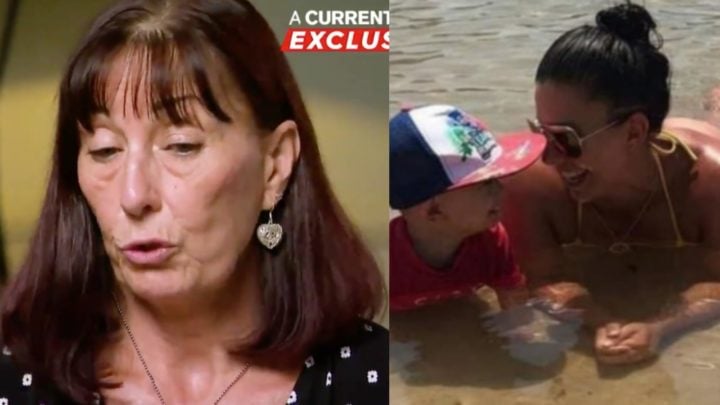 The family said their daughter had feared for her life in the weeks leading up to her death. Source: Twitter/ A Current Affair and Facebook

The family of Brisbane woman Hannah Clarke, who was tragically killed along with her three young children in horrific circumstances this week, have given an emotional TV interview, saying their daughter had feared for her life in the weeks leading up to her death.

Hannah, 31, tragically passed away in hospital on Wednesday evening after sustaining severe injuries in a horrific car fire, which was allegedly deliberately lit by her estranged husband Rowan Baxter. Her three children Aaliyah, six, Laianah, four, and Trey, three, were also killed, while Mr Baxter also died at the scene, reportedly due to self-inflicted injuries.

Speaking in an exclusive interview with Nine’s A Current Affair Hannah’s parents Llyod and Suzanne Clarke, and brother Nathaniel gave a rare insight into the months and days leading up to their deaths.

Asked whether they were concerned about their daughter’s life, Suzanne said: “I didn’t think he’d hurt the kids. She was concerned he would kill her. I believed that could be possible.”

She went on to reveal that only last week Hannah had shared her fears for her life. “She said to me ‘Mum should I do a will? What happens to my babies if he kills me?’.

Her mother added that Baxter’s behaviour grew worse as Hannah was preparing to leave him.

“While he felt he was still in control of the situation it was all not physically as dangerous,” she said. “But we knew there was no way she could say ‘I’m going’ and walk out the door.”

Hannah’s father, Lloyd, said she did everything she could for her kids. “To the end, she fought to make sure if he survived he got punished … She was so brave.”

Hannah’s brother, Nathaniel, added: “I just want everyone to know how much of a beautiful person my sister was … and her three beautiful kids.

“She was such a beautiful sister, mother, she was everything you could’ve aspired to be. She did everything, sacrificed everything for [her kids].”

As Hannah’s parents fought back tears, Nathaniel revealed that her body was so badly burned that the only print that could be found was her foot. They now want her footprint to be a symbol of the fight against the horrors of domestic violence and will launch a charity in Hannah’s name.

“I just can’t imagine a life without her,” Hannah’s devasted mother said.

Asked what they wanted people to take from this tragic event, the trio said: “Go home. Hug someone. Appreciate your children.”

Police are still investigating the circumstances surrounding the tragic incident and are yet to officially confirm the cause of the blaze, however, multiple reports claim witnesses heard a woman screaming “he’s poured petrol on me”. It has also since emerged that police had previously been called to the Camp Hill property to deal with a family violence incident last month.