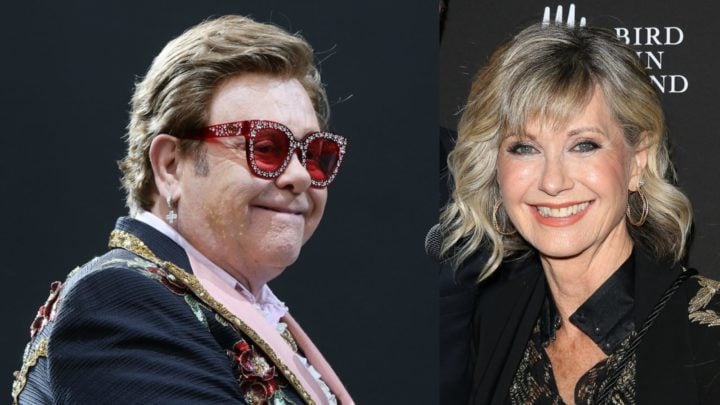 Elton John gave a shoutout to his friend Olivia Newton-John at his concert in Melbourne. Source: Getty

Elton John has showed his support of Aussie icon Olivia Newton-John with a sweet message to the star at his latest concert in the Land Down Under.

On Saturday night, the music legend took to the stage in Melbourne as part of his Farewell Yellow Brick Road tour in front of thousands of his fans to sing their favourite songs. But amid the excitement, Elton also took the opportunity to give a shoutout to one of his close friends who was in the crowd.

Standing front and centre at AAMI Park, the singer told Newton-John: “I’m a fan and I respect and love you so much and it was great to see you before the show, looking as good as you do. Bless you forever.”

The concert comes days after Elton was forced to end one of his Auckland shows and postpone two more after being diagnosed with walking pneumonia. The condition is caused by bacteria in a person’s upper and lower respiratory tract and can lead to symptoms such as a high fever, sore throat, fatigue and a persistent cough.

However, thankfully, Elton was back to his usual self on Saturday, telling the crowd that while his doctor advised against performing the show in Melbourne, he was determined not to disappoint his adoring Aussie fans.

“My doctor said I shouldn’t do the show tonight and I said ‘bollocks’ or words to that effect,” he said, according to the Herald Sun. “Big kangaroo bollocks. I wasn’t going to miss this. I’m glad I came. My voice is a little rusty but you’ve been so amazing, you’ve carried me through the night, thank you.”

But, his health isn’t the only thing that has come in the way of some of his shows, with brutal Aussie weather forcing him to cancel a performance earlier this month. The 72-year-old was left with no choice but to cut his show short in Victoria’s Yarra Valley, where Elton was performing at Rochford Wines’ ‘A Day on the Green’ event.

According to a post on the event organiser’s page, rain and hail began to fall around an hour and a half into Elton’s performance and damaged the equipment on stage, meaning the show had to be called off. The storm came after a day of blistering heat, as temperatures reached over 40 degrees in the Yarra Valley.

“Unfortunately due to tonight’s short but heavy downpour that occurred 95 minutes into Elton John’s set resulting in damage to musical instruments and monitors on stage, the show could not continue,” the post read. “We too are upset about the impact of the weather on tonight’s show.”

Dramatic images and footage of the downpour were also shared by those in the crowd on social media, with one image appearing to show rain falling horizontally onto the stage where Elton was seated behind his grand piano.

While another clip showed an employee running onto the stage to throw a waterproof tarp over the iconic performer as he continued to play despite the heavy downpour. However, the poster confirmed that the show was cancelled just moments later.

Are you a fan of Elton John? Have you seen him perform?