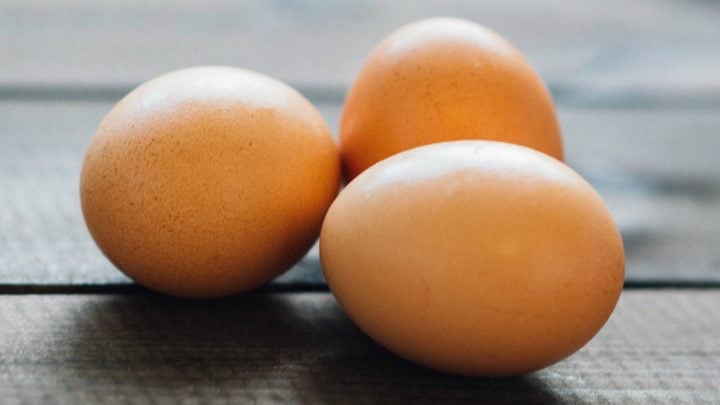 Five cases of salmonella have been recorded after eggs were recalled earlier this week. Source: Pexels

Just days after eggs sold at Woolworths and other major stores around Australia were recalled due to fears of salmonella contamination, the New South Wales Food Authority has issued a fresh update.

Popular brand Bridgewater Poultry was forced to recall a number of products from shelves in Woolworths and independent stores in the ACT, New South Wales, Victoria, Tasmania, as well as Coles in Victoria and South Australia on Thursday.

In the latest update, the Food Authority explained any eggs that are marked with the identifying stamp AF58-099-035 through to AF58-099-065 may be contaminated with Salmonella Enteritidis and should not be consumed.

“The stamp AF58-099-035 through to AF58-099-065 will be found on the shell of individual eggs, not on the carton,” a statement read. “Consumers are advised they should not eat the eggs and to dispose of them in the garbage.”

The Food Authority also stressed that Australians be wary if ordering eggs from restaurants or cafes as potentially infected eggs are often sold to these outlets in bulk.

“Eggs are sold in different ways. These particular eggs were sold in caterers packs, not cartons, mostly direct to cafes and restaurants though some may have been on sold directly to consumers,” the statement continued.

“All other eggs are safe to eat, provided people exercise the usual caution required for a special care food like eggs such as washing your hands and avoiding raw egg products particularly if you are a vulnerable population such as the immune compromised, under two or over 70 years of age or pregnant.”

The Authority explained eggs should always be cooked thoroughly until the whites are completely firm and the yolk begins to thicken. Meanwhile, it’s also important to be aware of the symptoms of Salmonellosis. These include fever, headache, diarrhoea, abdominal pain, nausea and vomiting.

In most cases, symptoms will appear six to 72 hours after the contaminated food is eaten and can last up to seven days. In extreme cases, these symptoms can stick around longer. If anyone notices symptoms they are advised to contact a GP or health professional as soon as possible.

On Friday, Victoria’s Department of Health and Human Services confirmed five cases of illness which could be linked to a strain of salmonella called Salmonella Enteritidis had been detected. Meanwhile,

Has the egg recall impacted you? Have you ever had salmonella?