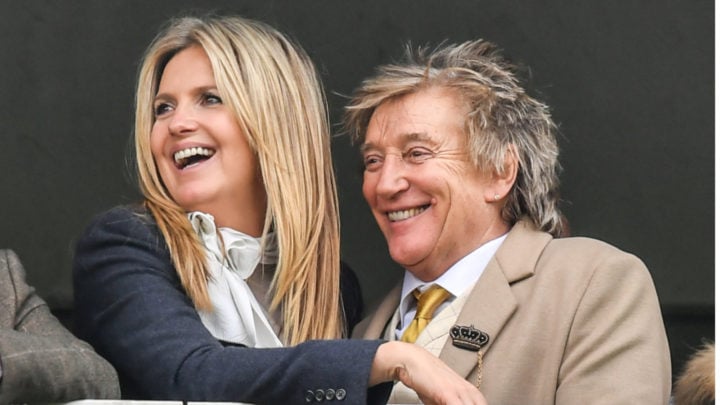 It’s certainly no secret that singing legend Rod Stewart has a lot of kids but it’s a rare sight to see them posing together for a family snap.

With such a big family it’s difficult to gather everyone for a nice photo so when five of the 74-year-old’s children were holidaying together the rock star took the opportunity to capture the special moment.

His wife Penny Lancaster, 48, took to social media this week to share the gorgeous image with fans, which was taken during a holiday in Palm Beach, Florida.

The beautiful family photo featured the couple, along with five of Rod’s children cuddled up on a couch. It was simply captioned: “Family holiday time but sadly there is always one or two missing @renee_stewartt @rubystewart???”

The famous couple can be seen smiling along with Rod’s daughter Kimberly, 39, and Sean, 38, who he had with former partner Alana Stewart.

Also joining them on the holiday was 24-year-old Liam and Rod and Penny’s two sons Alastair, 13 and eight-year-old Aiden.

Notably absent from the snap were Renee and Ruby Stewart, along with Rod’s eldest child Sarah Streeter, 56, who was raised by adoptive parents.

The post received plenty of attention from fans who left a flurry of loving comments for the gorgeous family.

“What a happy and beautiful family. You are blessed,” one person wrote on the post.

“You are the most beautiful family,” another commented.

While a third said: “Now that’s one good looking family!”

Although the moment was a happy occasion for the family, there have been some difficult moments in the past for Rod and Penny.

Earlier this year Penny opened up about the terrifying moment she assumed her son was dead after finding him face down in a stairwell following a horror fall.

Appearing on the UK’s ITV daytime chat show Loose Women, the model described the experience as the most frightening of her life – made worse because her husband was hundreds of miles away in America at the time.

Penny revealed she heard a loud bang moments before finding her youngest son Aiden, face down and unconscious at their home after the fall.

“It was the most frightening thing I’ve ever experienced in my life,” she said. “I was just off the main hallway where the main staircase is and I heard this ‘boom, boom, boom’. Huge thuds down the stairs… It sounded like a piece of furniture thrown down.

“I rushed through the door and didn’t see anything at the bottom, but in the stairwell I saw my seven-year-old, face down, unconscious. My first thought was he’s dead. He’s not moving. I can’t hear a sound.”

Penny recalled rushing over to check Aiden, all while screaming out for someone to ring emergency services, but he was unable to speak to her and simply made groaning noises when she comforted him.

“I was shaking but trying to be calm and going, ‘It’s OK darling, can you hear me, keep still’,” she added on the show. “He was making these groaning noises and couldn’t even speak. I went through all the worst scenarios. He’s broken his neck, he’s going to be paralysed.”

Aiden was taken to hospital in a back brace and luckily didn’t suffer any serious injuries.

Are you a fan of Rod Stewart? What do you think of the happy snap?