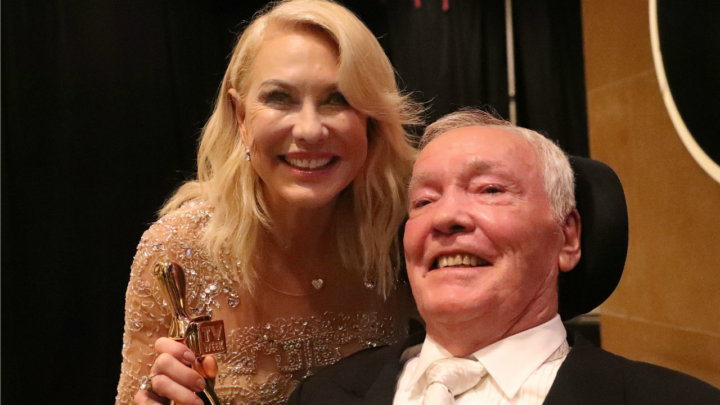 Kerri-Anne and John Kennerley had been married for 35 years. Source: Getty

John Kennerley, the husband of Studio 10 star Kerri-Anne Kennerley, passed away on Wednesday night. He was 78.

The TV personality announced her businessman husband’s passing on her Instagram page on Thursday morning. The couple were married for 35 years.

“It’s with a heavy heart and awful sadness that I let you know that my beautiful husband John passed away last night,” she wrote. “As you all know, John has faced some tremendous challenges over the past few years and with each he has been extraordinarily brave and determined to overcome those hurdles and live a normal life.

It's with a heavy heart and awful sadness that I let you know that my beautiful husband John passed away last night. As you all know, John has faced some tremendous challenges over the past few years and with each he has been extraordinarily brave and determined to overcome those hurdles and live a normal life. I want to thank everyone at St Vincent's Hospital for the beautiful care they have provided to John in his last days. John passed away peacefully with his son Simon and I by his side. John, you were the love of my life. Xxx

“I want to thank everyone at St Vincent’s Hospital for the beautiful care they have provided to John in his last days.”

Kerri-Anne explained that her husband passed away with her and his son Simon by his side. She described John as the love of her life.

Devastated fans flooded the star’s Instagram page with their condolences. One person wrote: “I’m so sorry to hear this heartbreaking news. Thoughts are with you and the extended family.”

Another person said: “I’m sorry for your loss. Sending love and light to you.” A third added: “Omg Kerrianne I am so, so sorry to hear. What a duo you were for so many loyal years. Thinking of you and sending love.”

John sustained spinal cord damage following a freak fall in 2016, when he slipped off a balcony at a golf course in Coffs Harbour.

John was placed into an induced coma and taken to Sydney where he had emergency surgery on his spine, but the incident left him paralysed and he had to relearn how to speak.

He later praised his wife for her unfaltering support.

“Without her I don’t think I would have attempted it but, as I say, she was there when I woke up and she has been with me every day,” he said of his recovery, during an interview with Channel 7’s Sunday Night program.

Studio 10‘s panel discussed John’s death on Thursday morning, with Angela Bishop visibly shocked by the announcement, which left her in tears live on air.

Kerri-Anne Kennerley's husband John has sadly passed away. Our thoughts, love & prayers are with our co-host & her family during this time. pic.twitter.com/xlxriSdj4t

“Kerri-Anne, we are sending you so much love,” host Sarah Harris said. “She is such an extraordinary woman for everything she has faced over the past few days.”

Do you have a message for Kerri-Anne and John’s family?