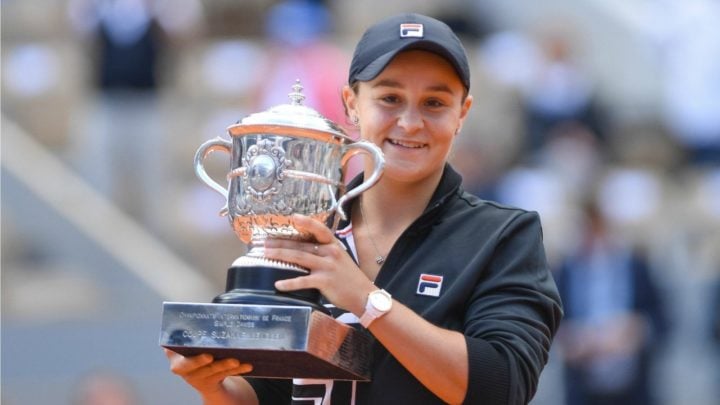 Australians all over the world are celebrating after tennis star Ashleigh Barty won the French Open overnight. The win is particularly monumental as Barty is the first Aussie player to win the French Open in 46 years.

The 23-year-old easily beat Czech tennis player Marketa Vondrousova and won the game 6-1, 6-3. The match was over in just 70 minutes and followed two weeks of tough competition for the Queenslander.

Iconic player Margaret Court was the last Aussie to triumph at Roland Garros in 1973. Barty now joins the likes of Court, Lesley Bowrey and Evonne Goolagong as the only Aussie women to be French Open women’s singles champions.

While the match tightened in the second set after a slower start from Vondrousova at the beginning of the game, it wasn’t enough to beat Barty.

After winning the match, Barty leaned over the tennis net and gave her opponent a big hug. She also seemed gobsmacked that she won the match and was spotted swearing in disbelief.

She described the game as a “perfect match” and called her two weeks of competition in France “crazy”.

Tennis champion Rod Laver – who was the No. 1 ranked professional from 1964 to 1970 – was on hand to congratulate Australia’s new champion.

She also reached the Australian Open quarter-finals earlier in 2019.

Read more: Fishnets and frills: Tennis attire has been causing outrage for years

“It’s a special place for Australians here,” Barty said, according to Tennis Australia. “Sam (Stosur) has done well here before and come so close. It’s been a magical two weeks.”

The star took a break from tennis in 2015 to try her hand at professional cricket, before returning to the game.

Fans and athletes alike have been praising Australia’s new tennis legend on social media for her win.

“Massive CONGRATULATIONS to @ashbar96 on your incredible win today,” Stouser said on Instagram. “So happy and proud of you!! Always knew you would achieve this incredible success! You have such a gift and determination and now the trophy to show for it all!”

Massive CONGRATULATIONS to @ashbar96 on your incredible win today! So happy and proud of you!!Always knew you would achieve this incredible success! You have such a gift and determination and now the trophy to show for it all!! 👏🏻👏🏻👏🏻👏🏻👏🏻🇫🇷🏆

Another fan on Twitter wrote: “Ash Barty, thank you for showing that it’s okay to step away from something you love for a while and then return to it when it makes you happy again. Congratulations!”

A third added: “Such poise. A class act all the way around.”

Do you have a message for Ash Barty? Did you watch the game?