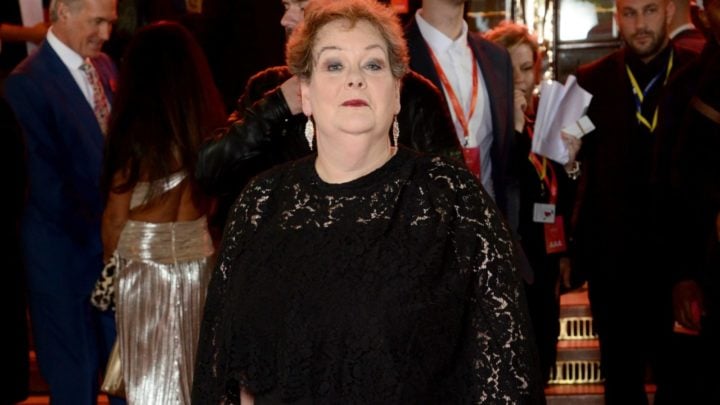 Anne Hegerty has revealed that the Australian version of the popular quiz show is on hold. Source: Getty.

Popular Chaser Anne Hegerty, better known as The Governess, has confirmed that the Australian version of UK quiz show The Chase is currently on hold due to the coronavirus crisis.

Speaking on Good Morning Britain recently, the television star, 61, revealed that she and fellow Chaser Mark ‘The Beast’ Labbett are having some trouble securing work visas at the moment. Anne told Scottish television presenter Lorraine Kelly that she was originally meant to fly out to Australia in March, which unsurprisingly didn’t happen.”And then it didn’t happen,” she said. “It was suggested that I go next month.”

Anne continued: “The thing is, those in Australia can’t get a work visa for me, they can’t get work visas for me or Mark. We’re kind of a little bit stuck at the moment. But again, we’d like to get out there as soon as we can.”

Despite filming being postponed for now, Anne said she’s enjoying some well-deserved time off. “I miss recording The Chase, we had a load of programs we were going to record and those have been postponed and that has been irritating, but apart from that to be honest, it suits me,” she said. “I’m absolutely loving it but I’m aware there are a lot of people not loving it. But I’m having a great time.”

Anne, who was diagnosed with autism when she was 45, went on to say that she’s actually had time to water her pot plants, cook and catch up on DIY projects around the house.

“I’m actually able to look after my pot plants to stop from dying, I’ve had time to water them a bit,” she said. “I’m cooking actual food, chopping vegetables in it. I’ve been doing a little bit of DIY, assembling things, but nothing more than that.

“Basically, I’ve been taking the opportunity to catch up with all the things I’d like to have done ages ago. I’ve just felt very overworked for a long time so it’s felt fantastic.”

The news comes after fellow chaser Paul Sinha mourned a long-time friend and quiz buddy who reportedly died of coronavirus. According to the Mirror Online, the TV personality took to Twitter in March to write a now-deleted tribute to his friend Jon Jacobs, who he said had died after contracting the virus.

“Woken up to the news that Jon Jacob, my friend, and quiz teammate for the last decade, has succumbed to corona,” Sinha tweeted at the time. “Farewell mate, we smashed Sunday afternoons. And you’ll always be the Greatest Classical Music Quizzer ever.”

Do you watch 'The Chase'?